This post is part of a group blog and will include submissions from West Virginia University students who participated in Amizade’s Spring Break Service Learning Course in Jamaica. Keep checking back to hear more stories from the group as they experience Jamaica, serve with the community, and reflect on their experiences!

Friday had to one of the most anticipated days on the trip; I know it was for me. After the challenging workday we had on Thursday, reinforcing fencing and cleaning up some signs around the school, I think we were all ready for another relaxing day at the beach. Personally, after spending the day at Bluefield earlier in the week, relaxing with Jamaican music playing the background and having an entire stretch of beach entirely to ourselves, I thought that Negril had a lot to live up to. I knew that Negril would not be the same, but I wasn’t exactly sure what to expect. I was excited to see this “touristy” area of the island and compare it to what we had been seeing for the majority of the week.

We made the hour journey, anxiously awaiting that first step onto the warm sands of the Jamaican beach, and, after a quick stop off for souvenir shopping, we were finally there. Upon arrival, I saw one thing I was not expecting at all, a Jimmy Buffet’s Margaritaville. I thought this popular restaurant was strictly seen at American beaches, but obviously I was mistaken. That was one of the most obvious things to me- this area was certainly more “American” than anywhere else we had been on the island. The food was especially different. All week, we had been eating jerk chicken, breadfruit, salt fish and ackee, and the like. Lunch at Negril was a chicken caesar wrap; not quite what comes to mind when I think of Jamaican food. 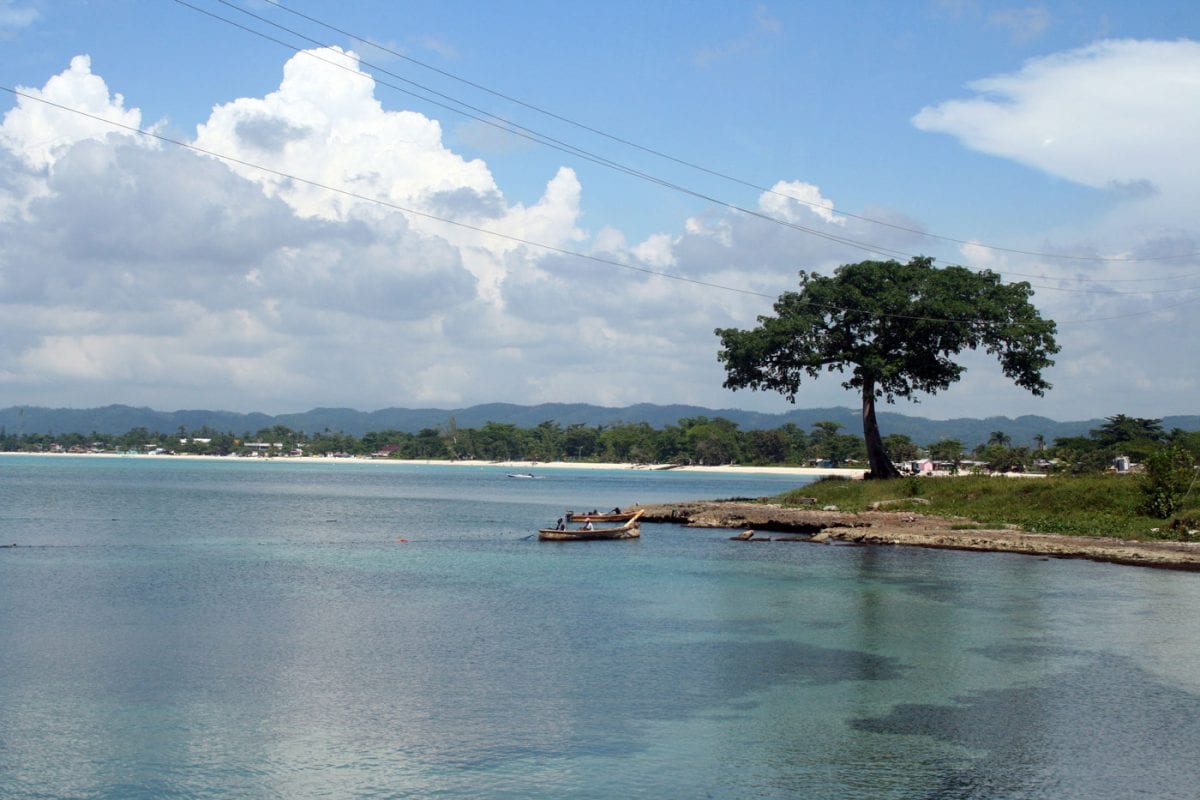 As for the actual beach, it was just as picturesque as I had imagined- long coastlines, warm sand, and clear, blue waters. At first glance, I noticed that it was, in fact, much busier than the beach at Bluefield. However, it was not as crowded as what I was expecting, or what I had seen in the past at American beaches. Most of us (those who weren’t too terribly sunburned) quickly found a spot to throw our stuff and headed for the water. After spending the day there, I decided that the beach at Negril was what you made it. If you wanted it to be calm and relaxing, you could lie out in a chair or float in the water and easily block out the outside world. On the other hand, if you wanted fun and exciting, the trampoline and running bridge floating out in the water provided plenty of that.  Everyone has different preferences, and while some preferred the beach at Bluefield, it did seem that others enjoyed the more public setting of the beach at Negril. That’s not to say that anyone did not like the beach at Negril, though; everyone had a great time. When the time did finally come to leave, the fun didn’t end; next stop- Rick’s Café.

There was a mix of emotions as we made our way to Rick’s Café to jump off some cliffs. Excitement, anxiousness, and apprehensiveness were all obviously present in our group. Some couldn’t wait to make the jump while others swore that they weren’t going to do it. When we finally arrived, one group quickly made their way to the thirty-foot platform, while the others anxiously watched and waited. One by one, individuals in our group made the plunge, some more gracefully than others. Many who were first on the fence decided to make the jump, and some even went twice. While not everyone in the group made the jump, those who did can now say that they jumped off the cliffs at Rick’s Café in Jamaica, which is pretty cool; not many people can say that.

The day could have ended there and we all would have been perfectly happy, but, with our friends from James Madison University leaving a day earlier than us, we were scheduled to have a send-off party on Friday night. After cleaning up from our day at the beach, we headed to the AOC. It was a night of full of laughing, dancing, food, and just spending some quality time with our Jamaican families. We partied into the early morning hours, eventually heading home around one to get some sleep and rest up for the next day of work at the schools.