This post is part of a group blog and will include submissions from West Virginia University students who participated in Amizade’s Spring Break Service Learning Course in Jamaica. Keep checking back to hear more stories from the group as they experience Jamaica, serve with the community, and reflect on their experiences!

Today was pretty uneventful, we returned to the schools and we switched places so that everyone would experience the different aspects of the Jamaican education system.  Because of this, I was placed in the ECI (primary school).  The children here were adorable and I enjoyed this experience more than the previous day.  While the elementary school students were a lot of fun, I have always had a soft spot for younger children and this came out today.  One of my favorite pictures from this trip came today.

At the end of the day, I received a love note from one of the 5th graders I had taught the previous day.  It was probably the nicest note someone has ever written for me, and it really made me thankful for all of the opportunities I have had through WVU and in Jamaica. I am not sure why it meant so much to me, but I will keep it for as long as I can. 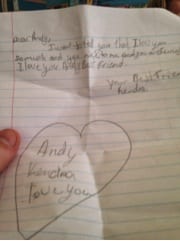 Before reading today’s articles, I read the prompt to prepare myself for what to look for.  The prompt was as follows:

“Develop and write out three questions for group discussion or one full analytic paragraph on the topic of Jamaican historiography. Historiography is the study of how histories are written and told.”

I started to develop thoughts on this so that I would be prepared for discussion.  My first thought on this statement comes from the Call of Duty games (violent I know, but I swear the quote makes it ok).  In these games, the loading screens would have quotes from famous war generals. One of the quotes I would see stuck with me and I think that it is extremely applicable to this prompt.  The quote is as follows:

History is written by the victors. -Sir Winston Churchill

Looking at which cultures value oral depictions of history further solidifies my beliefs. Typically, cultures that have been marginalized in history by western powers value oral historical accounts (i. e. Native Americans, Jamaicans, Africans etc.) over written accounts. While some might say this is a consequence of their culture (which is entirely possible), my readings and experiences have caused me to believe that there is more to the story. I believe that each culture is going to value the form of history and communication that their ancestors contributed to more directly. Most written histories are written by those who conquer, not by those who have been conquered. Because of this, the historically conquered people have relied on their oral histories to remember their history and culture.

Another important distinction between the two histories was brought up in the “History of the Accompong Maroons.” In this history, a historical Jamaican figure “Nanny” was mentioned. While nanny was ever-present in oral histories, she was rarely mentioned in any written accounts. This is because she was a primarily Jamaican figure and most of the written accounts were not Jamaican. She was a part of folklore and incredibly important to Jamaican culture (she is on their money). I think this shows how important oral history is to Jamaicans. There is no oral equivalent to Nanny in American culture, and no one like her is found on any part of our money.

I would like to put this thought up for discussion, does everyone agree with this mindset or do you think that there is more to the story?

Another example of the impact of historiography on the actual history came to me while having one of our group discussions. Gwen mentioned the fact that historiography is important because it helps the historian recognize biases in the history and helps them determine what actually happened as opposed to what the historical document claims to have happened. A fantastic example of this is the document-based questions on AP history tests in high school. I took a fair amount of these tests, and within the document based question (DBQ), we were given a large number of documented historical accounts and were then told to write an essay on a prompt. These DBQs are relevant because within the essay, we were instructed to mention potential sources of bias in the documents. I think this is why historiography is important; it helps us recognize biases in our historical accounts. Below is a short description of what a DBQ is on the AP World History test (http://www.wikihow.com/Answer-Document-Based-Questions-for-AP-Tests).

Talk to you later,