This guest blog from Amizade WVU semester student Shawnna Mullenax, is a wonderful summary of her experience at the famous Oruro Carnaval Celebration. On Saturday, thousands of Bolivians from the region poured into the town to experience the largest party of the year.

The alarm went off at 2am and Nora and I grumbled at each other until we finally got out of bed.  We had to catch the 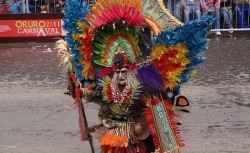 bus to Oruro at 3:30am so we decided to just stay at her house to avoid calling two cabs (and the very real possibility that one or both of us would sleep through an alarm).  The night before we had went out in celebration of Noche de Compañeras.. something of a city wide ladies night that is held around the beginning of Carnaval.  The following day we went to Spanish class and worked four hours at the orphanage.  So, by around 2am we just wanted to stay in bed.
We arrived at the center of the city at the same time that the big carter bus arrived.  Here those types of buses are called Flotas.  We killed a little time by buying a snack a tienda where some drunk guys tried to practice their English with us.  Listening to the silly things Bolivian men can come up with in English has become a favorite pass time.

Eventually everyone made it to the city center and we filled the bus.  Another Amizade service group, nursing students from Park University in Missouri, had arrived in Cochabamba the night before.  They are staying in the city for one week to do service work during their spring break.  The 14-16 students and chaperons (all women) made up around half of the group.  The rest of the people on the bus were native Bolivians. 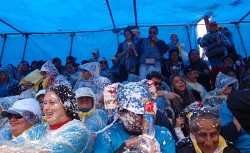 I’m not sure how long it took us to get to Oruro because I slept most of the time.  I estimate around 4-5 hours.  I know for certain that Bolivia has bumpy rough roads that made the windows rattle the entire way.  We arrived in Oruro fairly early in the morning but the Carnaval parade was already in full swing.  The seats were bleacher style with a big blue tarp over them to keep the rain out.  Although I couldn’t see for myself, I was told that the 6 kilometers of the parade route was lined with these types of bleachers.  We were packed so tightly into our spot in the bleachers that we could hardly move our arms.  There were no aisles.. just people practically sitting on each other.  Nora and I chose a spot at the very top near a rickety wooden ladder that served as the exit/entrance for the people in the back.  This was a good spot until a steady stream of people started climbing over us to go to the bathroom. So, we spent a couple hours alternating between a few minutes of watching the parade and then squirming around so that someone could climb down the ladder to the bathroom.

The parade was really interesting.  Different groups of dancers from various cities throughout Cochabamba performed 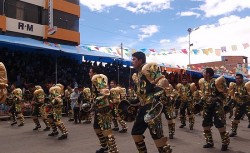 traditional dances in brightly colored costumes.  Each dance had a different meaning.  For example, there was a dance to represent the hunters and native indian.  For this dance the performers wore outfits that resembled Native American attire.  Feathers, fake animal heads and bones.  There was another dance later in the night called “Devil’s Dance”.  The parade is a traditional religious ceremony to celebrate the Virgin of the location where the parade is being held.  That said, today it seems to be much more about cerveza, water balloons, foam spray and the celebration of Bolivian culture than an actual religious ceremony.

This would not be a full account of Carnaval in Oruro without a few words about water guns, water balloons, and foam. 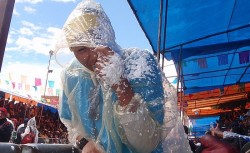 I’m not sure why but people like to spray water and foam at each other during Carnaval.  While on the bus before entering Carnaval we were given a poncho and a can of foam.  The whole day was a game of spraying people and trying not to get sprayed.  People get sprayed if they stand up and block the view of the parade.. but people also get sprayed for no reason at all.  Looking like an American girl is apparently a great reason for spraying someone!  The people that get sprayed the worst are the people who walk along the parade route selling everything from umbrellas to ice cream and beer.

The thing that I enjoyed most about Carnaval was practicing my Spanish by talking with some of the native Bolivians on the trip.Most knew enough English to keep the conversation going when I stumbled with Spanish.  But… it’s really exciting to have real conversations using what I’m learning in class.

The thing that I enjoyed least about Carnaval was discovering that the meat portion of lunch that had been given to all of the non-vegetarians was LLAMA!  Poor llamas.  I ate the non meat portion of the meal.. a serving of corn (it’s huge here.. and not really like corn in the US at all) potatoes, cheese and hard boiled eggs.  Nora and I have grown accustomed to these kind of meals (llama aside) so we ate lunch without any hesitation.  However, the other group from the U.S., having just arrived 24 hours before, seemed a little shocked and confused by the food.

We were at the parade in Oruro for around 12 hours before leaving at 9pm.  It is amazing how long Bolivians can watch a parade.  Jean Carla (our site director) says that they are conditioned for the activity from the time they are little kids.  So far I think Carnaval is an exciting event that seems to bring the entire country together.