Out of all the programs he has participated in, Tom Murphy’s recent trip to Bolivia was his “best trip by far!” 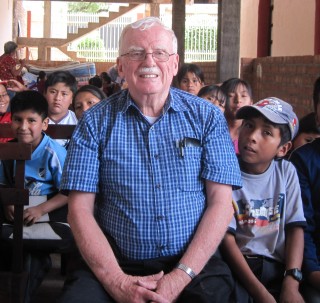 After traveling on three different Amizade programs, Tom Murphy is a well seasoned Amizade alumni and friend. Tom has traveled all over the world, including Amizade’s programs to Poland and the Navajo Nation.  In October, Tom traveled with Amizade on a Road Scholar program and had the privilege of spending two weeks in beautiful Bolivia. Tom worked with students of all ages at a local school, teaching and tutoring English classes.

When he began tutoring the students he was immediately surprised to find they were already well versed in English. “They had already learned English in school, but they were not pronouncing the words like a native English speaker. So I made a deal with them; I said I will help you pronounce your English if you help me with my Spanish. They seemed to really enjoy that.”

Tom had the privilege of working with a number of inspiring students of all ages, from 11 to 23. One particular young girl was a 23 year old student who traveled to English lessons every morning and then went to university classes in the afternoon. Seeing the motivated students and the community as a whole has inspired Tom not only to stay in touch with the community but to go back in the near future. 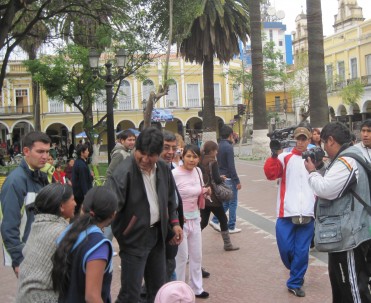 Along with spending time tutoring the children of the community, Tom and his fellow participants traveled and spent time around the country. One day the group was spending time in a local park in Cochabamba when the Bolivian President, Evo Morales, began to make his rounds. Tom described it as an experience like no other. The President was talking with the people, kissing the children, and shaking hands with everyone who approached him. Along with shaking hands with the President of Bolivia, Tom was also surprised by the constant construction that he was seeing – everything was under construction, things were being torn down or built up but nothing seemed to be finished. Even though this lack of development came as a small shock to Tom, it further solidified his experience.

After all was said and done Tom concluded his wonderful experience and has already begun thinking about returning to Bolivia in 2012. Tom still keeps in touch with the community and friends he met in Bolivia, sending pictures and keeping up to date on all the happenings through email. Today he proudly states “I feel like the people down there are like my family.” Tom has plans to stay connected and involved in the months and years to come.