Gwendolyn Flaherty of Agnes Scott College recently traveled to the Navajo Nation with Amizade. Throughout the experience, she found herself reflecting deeply on many topics including her own upbringing, US cultural norms, and the harm of otherizing. She eloquently describes moments from her time in the Navajo Nation while addressing important questions—this is a must read!

I knew before I began my journey to Navajo Nation that the most valuable things I’d learn would be unpredictable. After all, western colonial culture is such an effective tyrant because it renders itself invisible to the people beneath its influence. I had
expectations about what I would learn; about the untold stories of oppression, governmental bias, and bloodshed that led to the death of indigenous culture and freedom. Of course, one of the most impactful lessons I learned still ended up taking me by surprise. I discovered a new angle on colonial culture: the way it not only marginalizes outsiders but traps the people participating in it. I embarked on my Journeys trip with the intention of learning to liberate others, but I left my Journeys trip with an epiphany about liberating myself. I experienced a shift in values; from a focus on a future centered around my own financial gains to a sense of duty to the people around me.

I’d like to clarify that my personal gains were by no means the highlight of the trip.
The lessons I learned about culture, American history, and colonization through Navajo lips were precious and just as impactful, and they’ll never leave me. I am choosing to write about what I took away from this experience because so many of my peers view the Navajo Nation trip as a giving exercise: a donation of labor to a community in need. Their comments shed such a nasty, white-savior light on the journey, and serve as a telling demonstration of the materialism and ignorance bred into American culture. The Diné people were generous enough to share an experience that changed my life, and I feel compelled to put my gratitude into words.

The service work, as noted fervently by many of my classmates, was by far the most eye-opening experience we shared in Navajo Nation. It began on Tuesday at around ten in the morning when our two busloads of Scotties were deposited at a local farm. We completed a handful of odd jobs; cleaning sheep organs, carrying and chopping firewood, beating out old rugs from a former sweat lodge. Out of all these tasks, it was the trench-digging that impacted me the most. The job was simple enough. We were handed shovels, shown where the submerged walls of a former aqueduct bordered the path we needed to clear, and were told to dig.

It was in this simple moment while unearthing my own patch of the aqueduct, soiling my clothes and tanning in the sun, that I noticed something shift inside of me. The digging brought up a childhood memory. I was working in my backyard with my father; he had received a handful of saplings as a birthday present, and he’d brought me outside to help plant them. He handed me a shovel. I struggled for thirty seconds with breaking up the Georgia clay before the shovel was in my father’s hands. I have many memories like these. I didn’t really grasp how much they had stunted my development. My weakness (a symptom of being born into a small frame, and as a female) wasn’t something I could improve upon; it was a fact of life. I was weakness.

I remember devouring the Navajo Earth when I dug, feeding a hunger inside of me that I’d never been allowed to acknowledge, let alone satisfy. I felt capable and responsible, and free. I had free reign over that shovel, and over my little patch of the aqueduct. And contrary to what many of my peers expected, the work was fun. It was fun to work my muscles after months of sitting stagnant at a desk, or in a bed, absorbing vitamin D along with the stories and laughter shared amongst my classmates and our Navajo guides. At times, however, I was startled to find myself feeling angry when the other group members would come near. None of them touched the area where I was working, but I felt repelled by the idea that they’d start digging there. I wanted to claim that six-foot-long stretch as my own work. Even worse were the moments when I would see one of our guides, Lawrence, in my peripherals. I worried that I was a pitiful sight; I must have been working too slowly, or with flawed posture. Surely he would come over to correct me, or to send me to a different job altogether. My body tensed in anticipation, waiting for his hands to reach over my shoulder in a gesture to take the shovel. They never did.

Digging that trench opened my eyes to the structure that I was expected to grow into, an invisible set of steps that I had been prepared to trace. I’d never really acknowledged it before. I was expected to go to college, take up a lucrative career path, make money, get married, buy a house, live, consume. . . and die. It used to feel obvious. The feat of making one’s living off of manual labor was reserved for martyrs, and for the less fortunate. It was by no means a dignified way to make a living because it didn’t support a lifetime of spending myself to death. It was even less likely for me to picture myself as a manual laborer given my sex, and my small body. It just wasn’t in the cards for me. It definitely wasn’t what I wanted for myself. These were facts of life. Lawrence gave me the chance to step outside of these invisible boundaries and expectations, and allowed me to see what my body can do.

After digging for hours, clearing out my six-foot patch of dirt, and moving up the line to help the other students, I wasn’t tired. After conquering a steep, icy trail that sloped into the depths of the Grand Canyon (with admittedly less gear than what was necessary to ensure a safe journey), I still wasn’t tired. I was pleasantly surprised to find potential in myself: the potential to develop my muscles, and to go on hikes with my father and grandfather, and to carry heavy things if someone asked me, and pursue a life built by muscle (if that ends up being the path I choose to take). 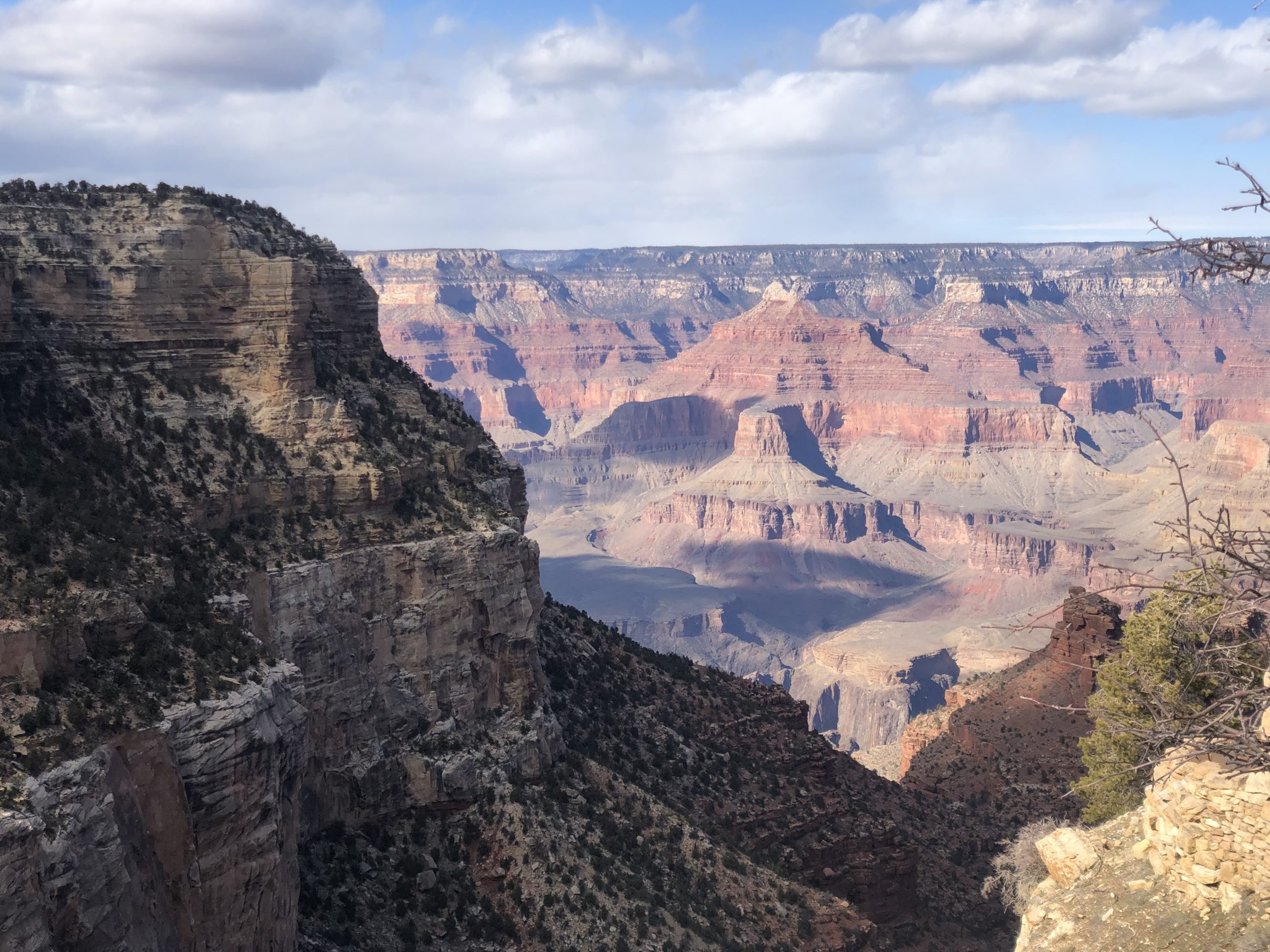 I was shocked when I realized just how dependent my self-worth was on my physical strength. I began to see more clearly the advertisements, television shows, people that form the pillars upholding the illusion of my physical weakness. I began to see the way colonial culture has molded American values into otherizing, materialistic, achievement-oriented things, and the way they have been accepted as facts of life. These values seem designed to oppose the community-oriented, manual, slow way of life of the Navajo, to frame it as “backwards”. I’m sure that used to be the purpose colonial culture served— to justify the uprooting of an otherized, backward people.

Now these values are oppressing the oppressors. Americans don’t see how trapped they are by their addiction to material things; by the need to buy more, and more, and more, only feeling compacted and weighed down by the useless items suffocating them; by the pressure to succeed in order to fuel this excess spending, to the point where they develop mental illnesses when they cannot reach their unbelievably high standards; to fit into the roles they are programmed to fit— gender-based, class-based, race-based societal shackles, through which large corporations advertise products to them, and to have lived in these roles so long that they can’t see why they feel starved. This starvation, this emptiness birthed from marination in a dehumanizing, colonial culture, is what keeps people trapped, and society has them convinced that more spending is the way out. 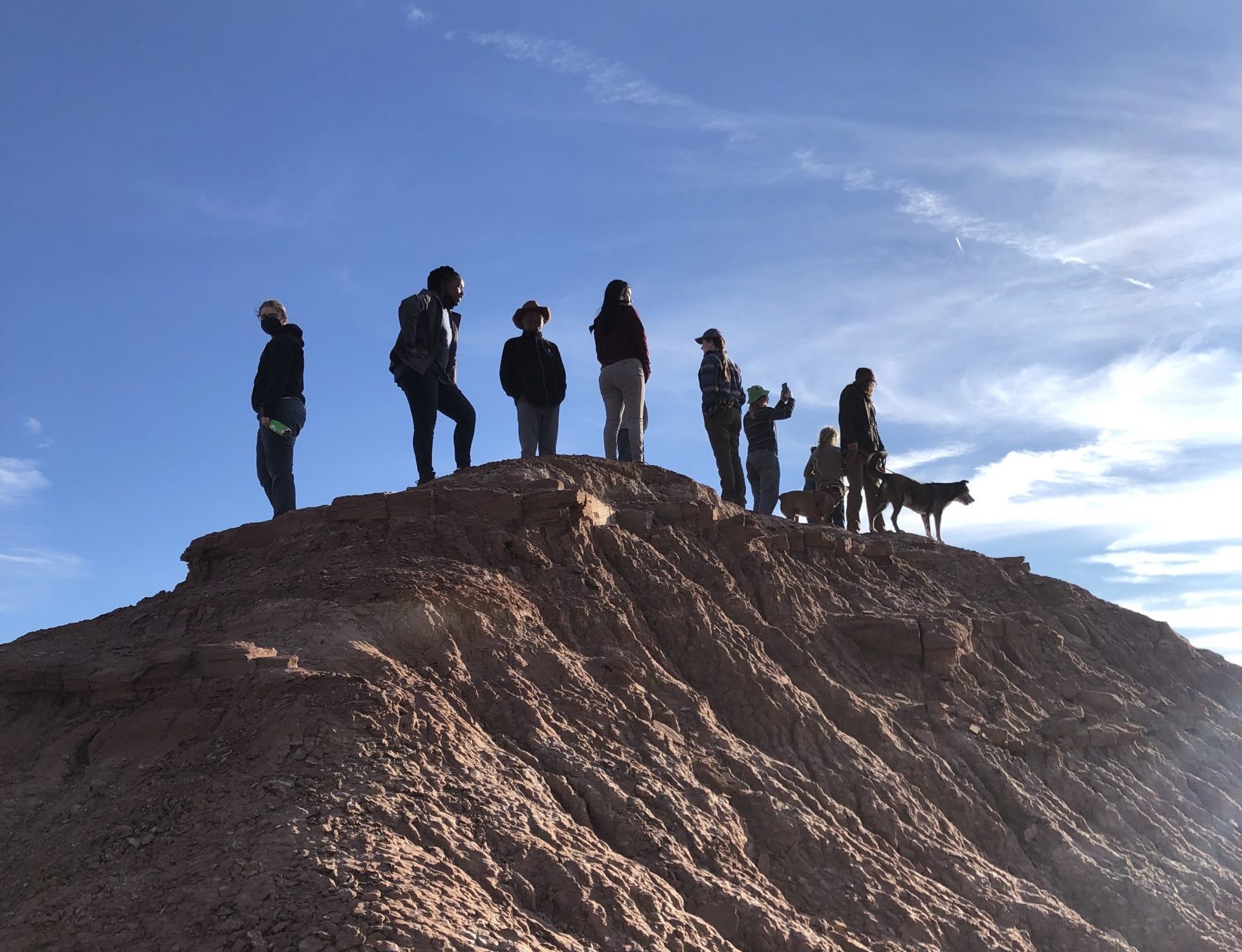 My trip to Navajo Nation blessed me with the chance to step away from this vicious cycle, and to immerse myself in a culture designed for humans, around human needs. Lawrence asked our group in Navajo, “What are you going to do with it?” in reference to our experience there. I can’t answer that question just yet, because I haven’t decided on my purpose in life. However, I’m confident that I will dedicate my future to something much more gratifying than what I was on track to use it for.

Lawrence gave me a gift: the opportunity to do. To do in the Navajo way, a way that’s meaningful, and fulfilling, and in touch with human needs, communal needs.

Thank you, Gwendolyn, for sharing this beautifully-written and thoughtful reflection!

Meeting with a Navajo Code Talker

Sharing and learning in the Navajo Nation