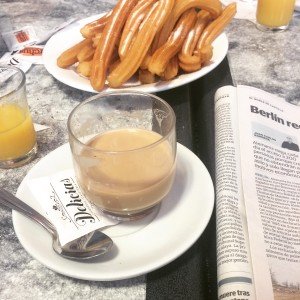 The mornings are late, the coffee is hot, and the company is good–it’s Sunday in Valladolid.

Even the city itself slumbers, relaxed and recharging for the hectic week ahead. The vast majority of shops and cafés are closed, leaving the sidewalks and streets free of cars and open to the occasional runner or dog-walker. An array of exercise clothing guards against the cold, a refreshing break from the inherent perfectionism of Spanish fashion. Sunglasses protect tired eyes, rimmed in red from lack of sleep and masking hungover headaches. Were this America, each passerby would desperately clutch a paper coffee cup, purchased from Starbucks, Dunkin’ Donuts, or corner coffee shop, but this is Spain, and takeaway coffee cups are a nonexistent convenience.

Just as the city pauses, so do its people. Any shopping or errands forgotten Friday and Saturday must remain incomplete until Monday, an institutional reinforcement of human intermission, allowing the day to truly be one of rest and not guilty procrastination.

Sunday is a day to re-center the mind and spirit by attending religious services or focusing on family–a reaffirmation of core values buried in the distraction and desperation of daily life. Instead of lifting weights and running miles, dedicated gym enthusiasts hoist their children onto their shoulders for a family walk in the park. Refreshed after sleeping in, the committed architect gets down on hands and knees with his daughter to construct Lego cities instead of heading to the office to meet the latest deadline. Even the public libraries are closed, forcing stressed students to remain at home with their biological families or collegiate equivalent.

In many Spanish families, such as mine, the importance of family is a tradition that has withstood the aggressive onslaught of cultural modernization. The stereotype of the extended family cohabiting together under one roof no longer holds true; however, my host father visits his parents almost every day, and he is not unique in his habits. The six, eight, or ten hour distances that separate American families are unheard of for the Spanish, an inconceivable disconnect on more than a geographic level.

Each Sunday morning, a few steps across the hall of the apartment building my host mother talks to her sister. Over tea and coffee they enjoy one another’s company, often for over an hour. While they talk, the rest of their apartments gradually wake to eat breakfast and discuss the night’s adventures: a jumbled, verbal conglomeration of the names of friends, locations, and city streets. We break, only to converge over mid-day Sunday dinner.

Sunday dinners are the only chance to eat together as a family, and as such are a production: the table is set for a minimum of seven, often eight, and sometimes nine. The extra table sections and chairs necessary for that week’s meal are added with eager hands and open hearts–the more the merrier. My host father sings as he cooks with his wife, an indecipherable but melodic line repeated in a boisterous voice, a happy bellow that echoes throughout the apartment.

The accompanying dance to his tune: five people passing through a hallway made for one in order to set the table, ducking under plates passed overhead, whirling in and out of the hallway’s adjoining bedrooms as steaming plates of paella pass; juggling the proper number of tumblers for water, pan perched precariously on the glass tower. I press myself against the wall as one of my host sisters charge past with fistfuls of silverware, singing along with her father. Each addition to the table brings a slight shift to the items already present, continual change to assure that all have adequate space with minimal bumping of elbows and knocking of knees.

There is an art to Spanish dinner conversations, a hectic abstract painting layered in jubilant strokes of luminous yellows, brilliant reds, and striking blues: speak up or risk being spoken over. A topic from a single voice starts the conversation but fast multiples into layered interjections and exclamations, each voice rising to be heard and applying a messy splash of color to the canvas. Two or three conversations now occur at once across the table, from corner to corner and end to end–four, if neighbor converses with neighbor. An interwoven net of noise, statements and ideas spill across the table in waves, dripping off the sides and rolling underfoot.

The women here have deep voices, a rumbling growl that allows projection throughout the room. Opinions are spoken with the tone of fact, strong and sure. An American conversation, notoriously loud and unruly, could not match the excited roar of sound that springs from the table. When things become too heated, my host father explains the discussion in simplifies words accompanied by a series of gestures and over-emphasized facial expressions. Good-natured ribbing instigates amusement from all, conversations often terminating in roaring guffaws and chortling laughter. 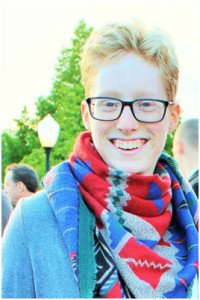 Delight in one another’s company carries the meal well into the afternoon–through the main course, a dessert of naranjas, platanos, and mandarinas, and after-dinner coffee–until it is time to part for siesta, with chipper goodbyes moving the house to quiet. As echoes of dinner fade the apartment settles, the mid-day sun drifting into the calming shade of early evening.

The food is delicious, the conversations are fulfilling, and the family is together–it’s Sunday in Valladolid, and the end of one of my favorite times of the week.

*Marie’s blog was originally posted on Lebanon Valley College’s study abroad blog on February 14, 2016, about a month in her program.

Hello! My name is Marie Gorman and I am a junior triple-major in international studies, Spanish, and studio art at Lebanon Valley College. When studying abroad in Valladolid, Spain, I had a fantastic time refining my Spanish communication skills, experiencing the culture, and trying as many Spanish foods as possible! In the States, I divide my time among a number of organizations at LVC, such as the women’s swim team and the national social-service sorority Alpha Sigma Tau, while working for the College’s Career Development Office and the Marketing and Communications Department.