In May of 2013, students from West Virginia University Honors College traveled to Santarem, Brazil with Amizade Global Service-Learning. While in Brazil the students learned about the challenges of providing health care in the Amazon region and even spent 5 days on a river boat visiting and serving Quilombo river communities. Thank you Nikul, Cameron and Kartik for sharing your experience with us! Check back soon for more from the WVU Summer Service in Brazil Program! 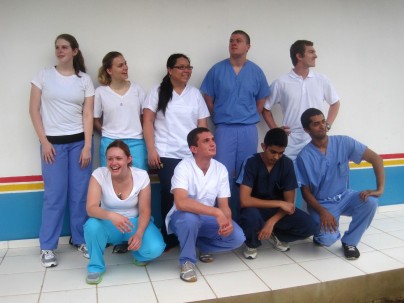 After weeks of preparation including several orientations, meetings with the Amizade staff, packing, and twenty-four hours of traveling we finally arrived in Santarem, Brasil. As soon as we walked out of the airport the humidity hit us all like several tons of bricks. Some of us were especially affected and broke out in sweat like the Niagara Falls. Our first cultural experience included driving back to the Alojamento. To our surprise, drivers in Brasil largely disregarded all safe driving practices except for wearing seatbelts and helmets (for motorcyclists). Motorcycles weaved in and out of stopped traffic, while drivers of cars made two lanes of traffic where there should only be one. Upon our arrival to the Alojamento we ate our first helping, of many, of rice and beans for following two weeks. After dinner as we attempted to cool down and stop sweating we became aware that we had been invited to play futbol with some medical students. To quote a later piece of one of our journals in order to see how much this trip was going to change our lives someone wrote, “If I was given the choice, I would honestly stay here forever.”

The Struggle is Real
Our first challenge with the language barrier was at the market. We explored the markets looking at fruits, fresh fish and other food items at first, and then walked around a different market with hammocks, TV remotes, and other souvenirs. Attempting to bargain at the markets seemed futile at first because the Brasilian storeowners could not understand us and vice versa. When some of us tried to barter for hammocks we were not able to put together complete sentences and ask for a discount, but simply say the price we wanted. The storeowners took this to mean that we simply could not understand the price they were saying and made it seem like they completely disregarded the price we wanted. Luckily two of the medical students we played soccer with, Alins and KG helped us figure out how many Real’s each item cost and if the item was worth it. Unfortunately the storeowners did not bargain as much as we would’ve liked! Some of us went into the trip thinking that Spanish was highly similar to Portuguese and we were proven wrong. Attempting to use Spanish as Portuguese led to saying very embarrassing things. For example, instead of saying “a cat slept with me for most of the day” one could end up saying “I slept with a male hottie today.” Other misinterpretations with the language barrier included accidentally calling a medical student “starving” rather than asking if she was “hungry” and offending her greatly for a few days. We were just beginning to realize the impact Brasil would have, but the struggle had just begun. 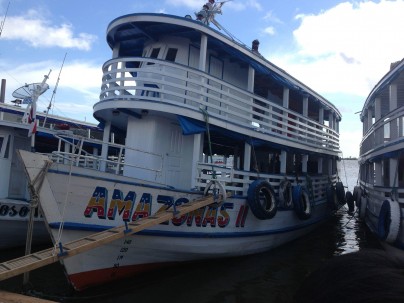 My 5 day cruise
At 6:30 am, I was jolted awake by the Seinfeld theme song. It was time to leave for the boat. Upon entry on the boat, we were once again exposed to the struggles of the language barrier, but this time, we were unable to say basic introductions, including how to say our names. Initially, most of us stuck to talking amongst ourselves between the hammocks; however, as the trip continued, we escaped our comfort zone and began branching out to speak with the others, the Brazilians. Although it was difficult to understand each other, oftentimes we resorted to charades to get the point across. Our luxury cruise ship was a double decker with four bathrooms including two showers, and an exquisite kitchen with two chefs that featured meals of rice, beans and cake daily, and unbelievable juice. Hammocks lined the upper deck to the point that some were sleeping on each other, packed like sardines. On the lower level, we had more space, yet we were forced to levitate our hammocks in order to create more space for meal tables, three times a day. As one of our own fell after busting his head on the rafters, the Brazilian nurses converged upon him and promptly stitched him up, while he sat there laughing at the situation. All of the materials were left waiting on the deck, in preparation for the clinics. 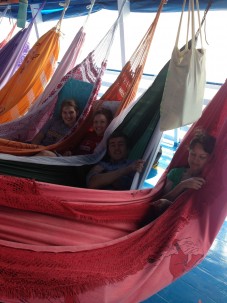 Clinic work began as we arrived the next day. Members of the community were to carry equipment from the boat to the clinic as part of prior agreement. We were able to contribute at five different stations at each clinic: triage, pediatrics, men’s health, gynecology, and perinatal care. Each nurse sees about 25 patients per session on average, and no more than fifty per day. After a final trip through the night with violently swinging hammocks and thoughts of the three communities and all of the medical procedures, we finally arrived in Santarem, disembarked the boat and headed back to the Alojamento. We would see the students and nurses again very soon.

Cayman vs. Caveman
Due to the high water levels in the Amazon River caused by the immense rainfall this dry season, we did not see as much local wildlife as we desired. Our ultimate goal was to see a Jacare, which is a Brazilian Cayman. At the first community, a couple people saw one for a few seconds, but we still searched for jacares that we could photograph. After a few days, we finally saw two full-grown Caymans in the river. This made our professor extremely happy, and our site director actually climbed up the side of the boat to show her the Cayman. The caveman part of this came from yet another misunderstanding when some of us heard that there was a caveman in the water instead of a Cayman. This led to yet another joke where we tried to find the caveman in water inlets rather than trying to find a Cayman.