This blog entry is part of an ongoing series from Amizade’s semester Service-Learning course in Tanzania. Today’s entry comes from Katie Wozniak, a sophomore biochemistry student at Duquesne University.

All throughout intermediate and high school, I considered myself a concert rat. At least once a month my friends and I would head down to Mr. Smalls or Club Diesel, usually being the youngest people in the crowd, to see one of the many bands we were infatuated with. These venues usually consisted of shoving crowds, mosh-pits, and crowd surfers. I’ve had my fair share of crazy adventures to faraway shows and completely ridiculous happenings, but none of these memories compare to our recent quest for Tanzania Bongo-Flavor Pop-Sensation: Diamond! 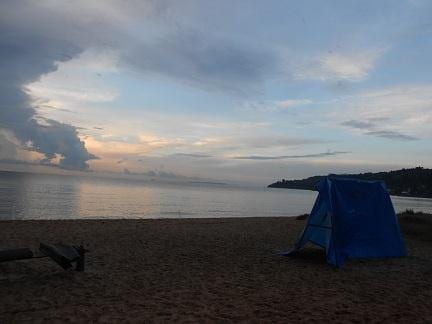 We packed up our bags early Sunday morning and hiked into town at 5:15 am to catch our Bunda bus (like Coach but much more crowded) to Bukoba. After arriving, we headed to the Lake Victoria beach front where we set up our lodging. Given my life-long fear of large bodies of water, I would have never thought that I’d sleep on a beach under a tarp only 20 feet from the water’s edge, but this was camp. Once our things were situated, it was time to head into town and to investigate the night’s entertainment.

Arriving at the night club at 10am, the doorman informed us that tickets would not go on sale until later that day; however, we haggled with him to reserve tickets for the evening in fear that the venue would sell out (note the sketchiness of the hand written ticket featured below). He told us to arrive back at the club by 6pm for the start of the show, but this is Africa. We knew that things wouldn’t be starting until at least 8pm, meaning Diamond wouldn’t be showing up until 10pm or later. 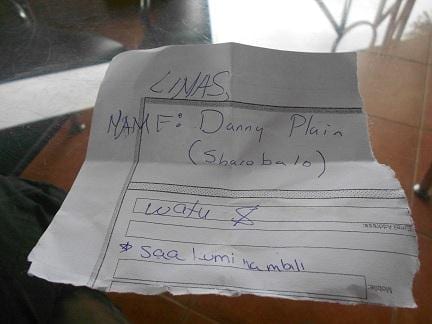 We spent the rest of the morning and afternoon walking around Bukoba in the pouring rain inquiring about the current location of Diamond. We attempted to find his posse in hopes of meeting him in person, but no one knew any specific details. Instead, we spent our free time eating ice cream (which is virtually extinct in Kayanga), impressing the locals with our knowledge of Kihaya (the local tribal language), and making friends in the city’s Maasai compound.

Around 10:30 pm, after an extremely belated dinner, we headed to the club. In the outdoor arena there were at least 200 lawn chairs arranged to watch a stage where what seemed like a dance competition was taking place. As the time went on and each dancer got to show their moves, the MC for the evening did a crowd vote to crown a winner for the event. It was just like being on a reality tv show!

Only 4.5 hours late, Diamond finally decided to show up! This cocky, egotistical attitude is common in bongo flavor entertainment. He was clearly lip-singing, but the crazy dance moves that he and his back-up dancers were doing almost made up for that letdown. It was so odd to see random members of the crowd rushing onto the stage to get a picture, give money to or dance with Diamond for just a second. Eventually a dance party was created in front of the stage and everyone joined together to dance in unison to “Moyo Wangu” (my heart – http://www.youtube.com/watch?v=e8AcwGOV_ds). Try to picture us mouthing unintelligible syllables while dancing uncoordinated steps, in the mist of die-hard fans singing at the tops of their lungs and dancing perfectly in unison. 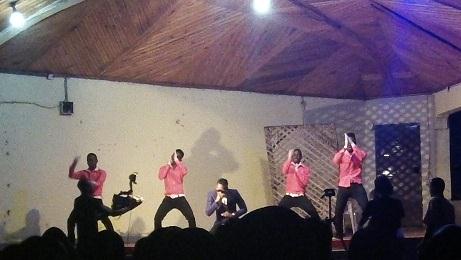 By the end of the show, I was beat. The end of the concert left me in a confused state of not knowing how celebrities in a developing country are supposed to act. Are they supposed to be charitable donors to poverty stricken communities or is their music which brings happiness enough? How can they get away with charging 10,000 TSH (apprx. $6.25) a ticket, when most people live off of 1,600 TSh ($1) a day? I don’t know enough about this major economic income gap to comment further; however, I will be keeping my eyes open to learn more in the future. Regardless of my inner moral debate, now I can brag to all of my friends back home that I am a world-traveled, cultured concert rat!