Think for a minute about something you have that you take for granted every day. You probably thought of something like water, 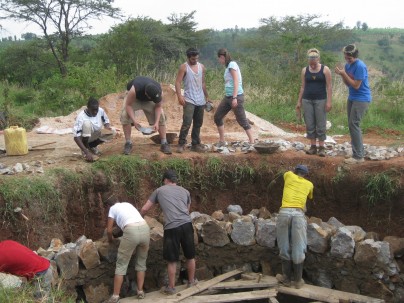 food, or shelter. These are all necessary for existence, but what about other things like having the opportunity to receive an education or have a job where your safety is a priority? On Saturday, we traveled to a rural village called Chunyonyo, which is 17 kilometers outside of the nearest bustling town. There we worked on a water tank and saw many aspects of a new project that is being implemented. To any outsider looking at pictures or video of our day, it would seem that we were simply placing rocks into a giant hole in the earth, but in reality we were supporting much more.

MAVUNO, a local non-governmental organization, is a partner of Amizade here in Karagwe. Mavuno means harvest in Swahili, so it probably comes as no surprise that this organization deals with agricultural needs in Karagwe. MAVUNO also focuses on clean water collection in throughout villages and for local farmers. The particular project our group has had the opportunity to work on however, is not just providing water to a village; it is part of a plan to construct a boarding school for girls. MAVUNO has begun construction on the school buildings, but they realize that there is much more to a school than the classrooms and dormitories. They have constructed one water tank already and are currently working on the second one, but they are combatting other development issues as well.
Through a partnership with Engineers without Borders Germany, MAVUNO is also designing a dry-flush toilet system that will be used by the school. This toilet is important for many reasons. It will collect feces and urine in two separate chambers which will cut down not only on the smell, but also makes both of these substances useful. Urine is composed primarily of ammonia (found in most commercial chemical fertilizers) so it can be used immediately as a fertilizer. Feces must be baked in an oven before being used as fertilizer in order to prevent the spread of pathogens, such as worms. Once baked for a few hours at seventy degrees Celsius in the oven, which the engineers have constructed the feces becomes sterile. The fertilizer is then used to support MAVUNOs Food and Seed Security program designed to teach farmers sustainable ways of performing organic agriculture. The design of this system also helps to fight against ground water pollution, which is a major problem since many people are reliant on water from local streams and ponds to survive.

The engineers are also designing and implementing a biogas digester system. This is a technology that allows one to use biological matter to create a source of energy. Normally biogas digesters use animal manure to create heat, but here in Karagwe most farmers do not have enough manure to support this venture because cows are very expensive (most farmers have one or two cows and it takes at least 8 cows to run a biogas digester system). The engineers have designed a digester that runs off chopped up banana tree stems, which are plentiful beyond imagination. This process also conserves water because traditionally you would have to mix water with the cow feces in order for it to burn, but banana tree stems store water within them. This resource will be used to cook food and to bake the feces from the dry-flush toilets. 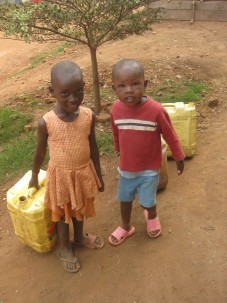 The school itself is being built on the principle that many girls are unable to attend school because of their duties at home. If they have the ability to go to school, they cannot study at night due to the many tasks given to them to help their families. The idea of a boarding school solves these issues because they would be freed of their responsibilities at home in order to focus on their studies. It also opens the opportunity to many who live too far away from a school to walk every day or that spend several hours a day just walking to and from school. It also gives an opportunity to disabled girls who otherwise would not be able to attend school.

While our pictures will show us carrying rocks, mixing cement, and plastering rocks on the inside of the tank to create a retaining wall, we built more than just a water tank that afternoon; eight wazungu ‘helping’ Africa in the most classic way. We also helped to further a project that will provide an education to young women in Karagwe, which means the ability for these women to one day provide for their families and their communities. As Brigham Young says, “You educate a man; you educate a man. You educate a woman; you educate a generation.”

Want to learn more about Amizade’s water work in Tanzania and around the world and participate in a great event? Join us for the 5th Annual Water Walk in Pittsburgh on April 7th and Morgantown, WV on April 21st. Can’t make it to the event? You can always donate to our water projects via our secure website.