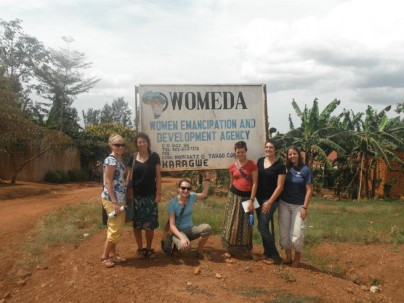 The following story is an adaptation of a story that my friend Lida told me and Kara while working at WOMEDA.

Once upon a time, there was a traveller named Mzungu who visited Karagwe, Tanzania. Mzungu did not speak any Kiswahili, but he was full of questions about the area and was curious to explore. Upon arrival, he decided to take a day and tour the town and the surrounding mountains and villages. The landscape was amazing, nothing like he’d ever seen. The hillside sloped down into a river that snaked through the valley. Past the river, the green mountains rolled on into the horizon. Mzungu walked down a red dirt path, past a few small tin-roofed houses until he came across a herd of horned cows crossing the path. To the cowherd, he asked, “Wow, so many cows! To whom do these cows belong?” However, the cowherd did not understand English, so he replied, “Sikuelewi.” A speaker of Kiswahili would have understood that the cowherd replied, “I don’t understand you,” however this meaning was lost to Mzungu. He continued on past the cows and further into the valley. As he surveyed the land, he was shocked to come across a large, fancy, two-story house. He walked closer to get a better look. A man was leaving the house, smartly dressed, and in passing Mzungu asked curiously, “To whom does this beautiful house belong?” For the second time that day, the reply was, “Sikuelewi.” Wow, thought Mzungu, this Sikuelewi must be some kind of fella. After a short while, Mzungu began the journey back towards town. He took the time to walk each street to get a better idea of his surroundings. On one of the side streets, near the market, he found a shiny, clean, brand new sports car. He was astounded! He asked a woman passing by, “To whom does this brand new car belong?” The woman, again unable to understand his question in English, quickly responded, “Sikuelewi.” Mzungu decided he had to meet this man. He finished his walk through town, and headed back towards the village he was staying in. Along the way, slightly off the main road, he came across a funeral in progress. He politely approached and asked a man on the outskirts of the group, “Excuse me sir, who has died?” And to this question, Mzungu received the same response for the 4th time that day: “Sikuelewi.” Mzungu was struck with sadness. He had heard so much about this man and never even had the chance to shake his hand.

This story was first told to me completely in Kiswahili. It was only a month into our trip, so I did not fully understand it on my own and depended on the help of Kara’s translations. The irony didn’t escape me either. I, too, like the character in the story, would have misunderstood were it not for Kara’s help.

Now, 5 days before we’re leaving Kayanga, I’ve had 2 and a half months to improve my Kiswahili. Recently, I re-told the story of Sikuelewi in Kiswahili to some friends, and it was really exciting to transition from the one who did not understand to the one retelling the story.