This blog entry is part of an ongoing series from Amizade’s semester Service-Learning course in Tanzania. Today’s entry comes from Joyce Keeley, a junior international studies major at Seattle University.

Be it funeral, wedding, or Sunday service, every time I enter a church, a silence sweeps the crowd as all eyes turn to stare. More than 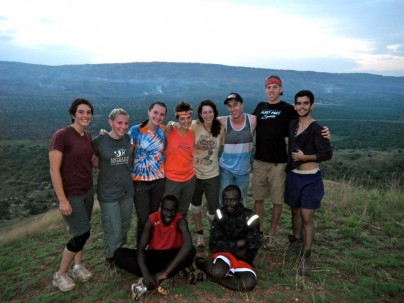 a few “mzungu ” (white person) are uttered under breaths as the ushers scramble to make sure I get a real chair and not a bench off to the side but in the front so that I’m visible to all. The pastor then starts awkwardly in broken English apologizing that they don’t have a translator for the day, floundering until I raise my voice enough to be heard over all the excited twittering of the congregation to tell him I understand Swahili. He astoundedly asks, “You understand little the Swahili?” And I respond with “Sana (a lot).” He doesn’t look like he believes me but continues on in Swahili making several references to the “guest” throughout the sermon until I am told to stand up and introduce myself to the congregation. When I finish my “Ninaitwa Joyce na ninatoka Marekani. Nimefika Tanzania mwezi wa tisa kwa ajili ya kusoma Kiswahili. Asante kwa kunikaribisha,” (I am called Joyce and I come from America. I arrived in Tanzania in the ninth month for the purpose of studying Swahili. Thank you for welcoming me), the crowd always breaks out in laughter and applause. There are also usually several people who try and take some not so sneaky pictures of me with their phones so they can show their neighbors later that this silly looking mzungu with Chinese hair can speak Kiswahili. After the service someone will come up to me and say, “Aisee! Umekuwa Mtanzania kabisa!” (Wow! You have totally become a Tanzanian!). Hard for me to believe when I’m surrounded by people staring at the one obvious outsider to the congregation. It doesn’t help that the Swahili word for guest, mgeni, is the same word for stranger.

When I first arrived in Tanzania in September, I figured my outsider status as an mzungu would be a temporary annoyance. The more I was able to hold my own in Swahili, dress like a local, and make connections with my community, the more I thought I would be accepted as a fellow human being instead of always being seen as an outsider. Seven months later I’m asking still asking myself if I will ever be able to break free from (or at the very least get used to) always being the mzungu. Is it even possible to accustom oneself to being a constant source of wonder, jeering, and disbelief? Every time I walk anywhere, all eyes follow me, kids literally stop in their tracks to stare, men yell out about looking for an mchumba (fiancée). Even though I have been living here in Kayanga for 6 weeks, even though I have begun to start making real friendships, even though I have told countless kids and young men and old women who yell out “Mzungu!” that I too have a name, I’m still the stranger here.

It’s not that Tanzanians are not welcoming–quite the opposite, in fact, as strangers are forever inviting us to their homes, constantly calling out to us in the street to come have a conversation, and always asking for a phone number to seal the friendship. Within minutes of meeting someone, he or she is asking when I’ll next be back and how will we keep in touch when I leave for Marekani because he or she will miss me so much. It’s rather overwhelming to feel so welcomed at times, especially when I feel that I have done nothing to deserve so much attention. It’s the same feeling when I accomplish any minor task such as washing a dish or tying a kanga (traditional fabric that women use for everything) and people will congratulate me with the same amount of shock you might have upon congratulating a ten year old who has just graduated law school.

It actually reminds me a lot of what I learned in my Sociology and Africanist Philosophy classes at Seattle University as we were talking about the experience of the minority in the United States and DeBois’ idea of double consciousness. As an over-privileged white female primarily surrounded by people who looked like and thought like me, it was a difficult concept to grasp then since my identity had never been imposed upon me by the dominant majority. Since arriving in Tanzania and struggling with my desire to immerse myself in and assimilate with the local culture versus my imposed identity of an outsider mzungu, I have begun to understand this dynamic a lot better. No matter how much street slang I use or how much I insist upon washing my own clothes by hand just like all other African women, I am still perceived as this crazy mzungu, not just a fellow human being.

True, most of the people I interact with here have had very little exposure to the mzungu world outside of television and a few village anecdotes so I really can’t blame their reactions, but there are of course some moments where I feel like more than just my white skin has been seen. This past weekend we spent a couple hours around a bonfire on the shore of Lake Victoria with some random locals and I got to talking with one of the guys there. It started off like so many other conversations where he could not believe I’d only been studying Swahili for 7 months and is it really true any American can own a gun and would I take him to the land of Obama? But after I articulated my frustration to him about always getting such questions, the conversation turned into a genuine exchange of ideas between two human beings. Even though he had only gotten the chance to study until third grade (his father had over twenty children), we discussed cultural stereotypes, the value of questioning education, our legacy to future generations, and the reason for the inequities between developed and less developed countries. And when he enquired as to whether I believed in God, he actually openly listened to my existential doubts rather than just asking whether I was Lutheran or Catholic or Muslim and then moving on to whether or not WWE (World Wrestling Entertainment – yeah I didn’t know what it was either) is for real or fake. I left the bonfire that night feeling fulfilled and challenged as a fellow human being rather than just seen as this wonder that is the mzungu.

I think the reason it bothers me so much that I still feel branded by this outsider mzungu status is because I’m always trying to prove to myself that this idea of global citizenship is not just a relative understanding. That cross-cultural relationships are possible, that two soldiers from completely different backgrounds can see their common identity, that we won’t always be divided between the haves and have-nots but will someday find the compassion that our shared humanity demands. How many years would I have to live in Kayanga before people would start yelling “Joyce!” every time I passed and not just see me as that crazy mzungu who knows Swahili? Would it be the result of increasing globalization or just people getting used to seeing my face around town? Whatever the case, I do not regret having to struggle with this imposed identity – in taking the time to challenge Tanzanians’ perception of me as just an mzungu, I am also reminding myself that I too hold stereotypes that constantly call for reexamination.