This blog entry is part of an ongoing series from Amizade’s semester Service-Learning course in Tanzania. Today’s entry comes from Juan Escudaro, a sophomore philosophy and psychology major from Duquesne University.

Our Unnecessarily Fun Night On Top Of The Mountain

Think about the absurdity of a lifeguard being afraid of water or a kid drinking a hot cup of coffee in the middle of a warm summer day as he plays with the sand in a crowded beach. The reaction that most of you would have if you actually encountered such paradoxical scenes should be a fair comparison to the feedback and reactions we got as we planned and prepared for our camping trip to a mountain two hours away from our guest house. The plan was simple; it only took a couple of conversations between the group and some typical advice from the group elders (Nathan, Paul, Caitlin) for us to establish the technicalities of the trip. Egbert (yes, that really is our cook and dear friend’s real name) was in charge of preparing and bringing food for dinner and breakfast and the rest of us had to buy a couple of mats and a tarpaulin for the improvised camping site. In my mind, as I’m sure it was for most of my fellow campers, every aspect of the plan seemed perfectly reasonable, not to mention exciting. Judge for yourself; after going to the market to buy the mats and a tarp we planned to start a two hour journey to the mountain top through a path that transitions as we move downward from lush green trees and rusty red soil to pale cactuses and sulfuric rocks. Then we have to carefully tip toe across a waterbed river and finally up to the top of the mountain where we are to set the camp and spend the rest of the night eating, drinking, laughing and dancing under a bright ocean of burning stars. 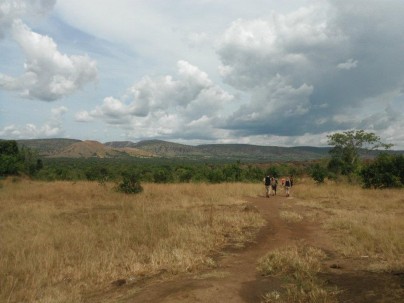 This vibrant and picturesque presumption collided with the bleak and somewhat undermining reactions that some if not all of our local friends had of our plans for the day. Erin, a friend of ours who occasionally has breakfast with us, had trouble understanding why if we had warm beds and a roof over our heads would we even consider walking down the hill, across the waterbed river and up the steep mountain in order for us to eat along side bugs and sleep under the cold and dim stars during the rainy season. This was the first of a number of similar reactions that defied the reasoning and purpose behind our plans. In other words it made no sense that we were to put ourselves through such an ordeal for the sake of adventure and fun when there are people in this community that have to travel the same or longer distances, in a weekly or even daily basis, in order to provide for their families. As it turned out we did end up eating with bugs and hiding under our tarp as we cuddled through a cold and rainy night.

Don’t get me wrong; I truly believe that the most fulfilling and meaningful human experiences lie in the boundaries between reason and the irrational. For instance even though our night fulfilled most of our friend’s pessimistic expectations we still drank, laugh and danced making it one of the most memorable and enjoyable experiences so far. What both intrigues and puzzles me is this recurrent idea about how the guidelines of reason and irrationality vary according to the different contexts of reality and how interactions between them allow for growth as well as conflict. In other words, the constant interaction with what is different can allow for positive or even detrimental outcomes. Take all the different times some little kid has yelled a whole slew of Swahili at us- we can either ignore them and continue on our way or try to have a genuine conversation and hopefully establish friendship even if we still don’t understand half of what they are saying. Whenever the apparent differences are left unexplored the consequences are at best funny but more often annoying and frustrating. On the other hand the mutual sense of curiosity, which drives some of the most sincere interactions here in Karagwe, serve as a fertile ground for constructive relationships, allowing us all to grow and exchange the fruits of our very different cultures.