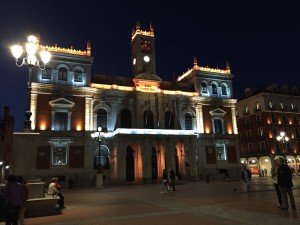 Studying in Valladolid, Spain, my main goal was to obtain language immersion, to immerse myself in Spanish. I wanted to live the language, I wanted to breathe the language. Sure, classes back home gave students a taste of it–but occasional exams in my small Pennsylvania hometown were nothing compared to the constant stream of Spanish in Valladolid. I started my day with a buenos días and ended it with a buenas noches. I sang along with Spain’s top radio station blaring in every store. I even found myself momentarily confused when someone would pronounce my name without a Spanish accent.

Believe me, though language immersion is an uphill battle. At times, you will find yourself staring blankly at an employee in the check-out line, nodding your head slowly as four million words per minute go in one ear and out the other. There will be moments where you flounder around miserably while conjugating verbs in the imperfect subjunctive tense, or trying to remember that easy vocabulary word from Spanish 101. You might even have to repeat yourself three billion times in three billion different ways, just to have the person give up and switch to English when talking to you. Language immersion is not for the faint of heart. 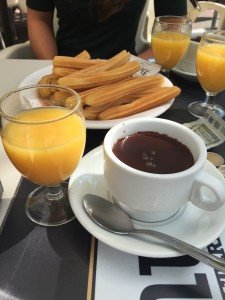 In Valladolid, our professor introduced us to local Spanish students who were as eager to practice their English as we were to practice our Spanish. We arranged to meet at a café each week over churros and coffee, where we split the conversation in half between our two respective languages. Topics ranged from sports, to music, to pop culture, to life in the United States, to travel destinations in Spain. We taught each other certain customs and traditions in our countries, and we learned new slang words that made us all feel just a little more like native speakers. It didn’t stop there–our group even took us out for tapas and dancing on a few occasions!

Over time, some of our group’s other local friends started trickling into the mix. Our dynamic ensemble soon consisted of anyone from university students, to thirty-year-old law students, to sixty-year-old musical theatre fanatics, to middle school English teachers right out of college. Getting to meet such a diverse array of Spanish citizens gave me an up-close and personal look inside the many different aspects of life in Spain. With so many careers, age groups, senses of humor, hometowns, and unique perspectives, the image of Spain I had in my head quickly morphed into a complicated, beautiful collage of their experiences, of their stories. Every week, I couldn’t wait to add to my canvas.

Joining a language exchange group allowed the study abroad students to form new friendships and experience Spain in a way a tourist never could. Not only that, but it offered us refuge in a judgment-free zone, away from all the confused store employees and overwhelming chatter on the streets. Everyone in the group knew what it was like to struggle through a new language, and we supported each other through every mispronunciation and lost translation. 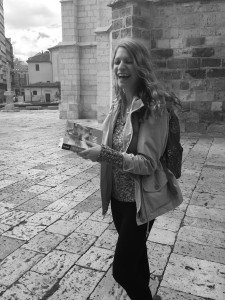 While your group will likely form based on your professor’s university contacts, like mine, there are plenty of other options if you’re struggling to find one that fits. You may have friends who want to practice, your host family might have a few suggestions, or you can search for language exchange groups in your city on global networking sites. You will be surprised how many people are interested in practicing with you–there is a huge emphasis on foreign languages in Spain compared to in the United States. With so many options, some of my friends joined a group of language learners from around the world, another formed a conversation group with Valladolid’s local program ambassador, and others stayed in my group. The whole city is yours–find a group that makes you feel comfortable to make mistakes and keep on trying.

No, language immersion isn’t for the faint of heart. You’re thousands of miles from your home, you’re constantly translating inside your head, and you’re pretty sure you’ll never get rid of that darn accent of yours. Language exchange groups will remind you that you’re not alone. You’ll meet new people, struggle through verb tense conjugations together, gain confidence in your language skills, and learn so much more beyond that. This isn’t just your chance to practice Spanish; this is your chance to create your collage.

I’m Sharon Sees, and I’m a senior from Lebanon Valley College with a double major in Spanish and Health Science, and a minor in Global Studies. Notable skills include freaking out about my future career goals and daydreaming about churros con chocolate from Valladolid.