This past spring, Katy Merckel and Becky Gailey- both Boren Scholars and seniors at the University of Nebraska- traveled to Amizade’s site in Tanzania to spend 14 weeks serving and learning with our community partners in Karagwe, Tanzania.  Each of them shared with us their reflections on their experience in Tanzania and their final thoughts as they say goodbye to their new friends and family in Karagwe.

Siri ya maisha ni ujasiri – The secret of life is to be daring. 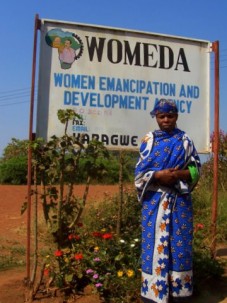 I find myself at the end of what has been, by far, the 3 most exciting and educational months of my life, and I’ve been given a simple task: write a blog about my experience. But I’ve been sitting here staring at this computer screen for a while now because really, nothing I can write will do justice to what has happened. In the end though, all I can do is to try and to hope that I will be able to convey even a smidgen of the amazing experience that has been my life in Kayanga.

This grand adventure started 8 months ago when I arrived in Zanzibar to study Swahili as a Boren Scholar. I had attended a two-month intensive language-learning course in Florida, and I was now being let lose to navigate a portion of the world dominated by a different language and culture. At first, everyday was a struggle to communicate, but eventually I learned and I left Zanzibar at the end of four-months with a working grasp of Swahili and a desire to put it to good use.

After a month of travelling, I found myself travelling up into the Northwestern highlands of Karagwe, a section of the country that is closer to Uganda and Rwanda than much of Tanzania. I was unsure what would meet me here. Had a really just signed myself up to live in the middle of rural Tanzania for 3 months? A few months earlier I had had the opportunity to switch my program from the one in Karagwe to one in Dar es Salaam, and I almost did because I felt that being in a city would be less jarring, more fun. Then, one of my friends gave me a nice little talking to and told me that what I really doing was wimping out and that if I didn’t accept this challenge I would regret it. Oh how right she was, and I will be eternally thankful to her for telling me what I needed to hear instead of what I wanted to hear.

Karagwe is, to say the least, a bit rustic. The main town of Kayanga is made up a few dirt streets (but at least there’s an ice cream shop on one of them!) and the average yearly income is about what an American working minimum wage would make in three days. There are always cute, dirty children running around waiting to greet you with a “Good afternoon, madam,” and it is almost impossible to take public transportation without having to share the vehicle with a chicken. It is, simply put, a wondrous place.

What Kayanga is more than anything is a community. When I think I have finally gotten use to the welcoming attitudes of people, someone does something new that has me thinking, “I really have met the nicest people here.” I am sad to think that when I get back to America, everyone will not invite me over for tea, introduce me to their mother, show me their sister’s wedding photos and then insist I stay for dinner. It’s not that Americans don’t care about the little things in life, it’s just that Tanzanians seem to care so much more.

So I had found myself in a beautiful little community where, after only 1 month, it was impossible for me to walk through town without running into someone I knew. Then, to make my experience even more rewarding, I had the opportunity to work on a project that I am truly passionate about. I spent my three months in Kayanga volunteering with the Women’s and Men’s Emancipation Development Association (WOMEDA). WOMEDA has many projects, but its main goal is to increase human rights by offering free legal counseling and educating the community. In the past few years, WOMEDA has noticed a rise in the number of gender-based violence (GBV) cases that it has heard, so it wants to start a new project to help address this problem in the community. Who did they put in charge of the preliminary research project to learn about the problem in the community and make recommendations as to how GBV should be addressed? If you are thinking it was someone amazingly qualified with years of experience in the field, you would be wrong. It was just little ol’ me from the University of Nebraska armed with nothing more than a powerful sense of indignation for GBV and a will to make things happen.

To say I struggled during this process would be an understatement. I found myself doing research and writing surveys in Swahili, attempting to familiarize myself with the local environment as quickly as possible, and most challenging of all, navigating the tangled hierarchy of the local government. I was working with a different culture and was forced to accept that scheduling a meeting for 8am meant it really wouldn’t happen until noon. I really can’t remember any other time in my life when I have been so frustrated but have had so much fun. Though it was challenging at times, I learned so much, and I will truly miss working with all the warm, wonderful people at WOMEDA.

The highlight of the project was traveling to 13 different villages and interviewing 145 people. We visited schools, mosques, government offices, health centers and farms to talk with as many people as possible about GBV. The last month here I spent well over 40 hours a week working on the project, but it was a labor of love and I could care less about all those lost hours of sleep and dreadful car rides on back country “roads”. The more I talked to people, the more I learned, the more I was drawn in to this project. I have heard so many stories that have horrified and outraged me, but I can only hope the work I did will those who told me them. Now, my time has come to an end, and as a result of all my work I have a 35-page, 1.5-spaced paper addressing perceptions of GBV in the area and an assessment of how it is currently being addressed.

The one thing I can say though is that I will come back here. Plans are in motion and if everything works out as I hope, I will be back in Karagwe at the end of this year. I want to come back to see friends and visit WOMEDA, but I really want to come back because I feel as if I have so much more work to do here.

About a month ago, Amizade’s director asked me and the other student here (shout out to Katy!) what we would start in Kayanga if we were given $20,000. He apparently thought our idea was good enough because we have spent the last month running around doing research and have managed to put together the rudimentary elements of a grant application. We have a lot of work in front of us when we get back to America, but we’re ready for it. I can only hope that we will continue to get support for this project and that I will be visiting Kayanga again to implement it.

If my time in Karagwe has given me anything, it is a clear realization of what I want to do with my life. Before doing this program, I knew that I wanted some job working to advance global human rights, but there are a lot of different paths that go that direction in the world and I really had no idea which one to take. After volunteering and living in Kayanga, I have come to the conclusion that I would be perfectly happy the rest of my life working at an NGO like WOMEDA to advance women’s and children’s rights. I have really become interested particularly in the right to an education because unlike in America, not everyone has the chance to get an education here in Tanzania and so many other countries in the world. In the course of my research and while living here, I have heard so many stories of people being denied the chance to an education, the chance to a better future. Maybe one day I can do something to help stop that.

So what’s next? First it’s a whirlwind 10 days of travel to visit friends in Uganda and Kenya before returning to Zanzibar to head back to America. I have found a summer campaigns job, and while I am excited to start it, I really don’t know what it will be like to be back in America just strolling through the streets working a 9 to 5 job. I am not the same ol’ Becky that stepped off that plane in Zanzibar 8 months ago. I’ve had a taste of what my life could be like, so I’m going to chase after it, even if that means doing crazy things like trying to start an NGO in Tanzania as a 22-year-old recent college graduate. But as one Swahili saying says, “Siri ya maisha ni ujasiri – The secret of life is to be daring.” So I’ll keep on daring, keep on challenging myself, keep on taking the non-easy path, and I hope one day that path will lead me back to Kayanga.