Gazing upon the structures today, breathtaking white-stone castles overlooking the Atlantic Ocean, it may be difficult to grasp the tragic history that lies within their walls. Cape Coast Castle and Elmina Castle, located on the southern tip of Ghana, are both stops along an Amizade volunteer program in the West African country. Centuries ago, however, Europeans occupied the castles, using them as crucial stops along the Trans-Atlantic Slave Trade Route. They were the last places in Africa that many enslaved Africans saw before a long and grueling journey across the Atlantic towards a punishing life as a slave.

Built by the Portuguese in 1482, Elmina Castle is the oldest European building still in existence in Sub-Saharan Africa. The castle was later controlled by the Dutch, and then the British before finally being handed over to the people of Ghana when Britain granted the Ghanaians their independence in 1957. Cape Coast Castle has a similar history, as it was built by Swedish traders in 1653, later seized by the Dutch, and then changed hands to the British before finally resting in control of the Ghanaian people.

Visiting Elmina Castle and Cape Coast Castle allows Amizade volunteers to gain a better understanding of Ghana’s past and its effect on the people and culture of the present. The castles tell a story of immense oppression and hardship. They are places where Ghanaian ancestors were held captive, tortured, and bought and sold as commodities. Learning this history undoubtedly leaves a lasting impression on many Amizade volunteers. West Virginia University student, Kristen Madron, said about her recent visit to the castles on her service-learning trip with Amizade,

“I definitely think that learning the history of the slave castles is important. Realizing the hardships, torture, and how many people had to live up to three months in small places with little water, will definitely have a lasting effect on me.”

Amizade volunteers have the opportunity of seeing the tiny dungeon cells that held up to two hundred people at a time. They get to walk the same paths that thousands of slaves once walked, paths that eventually lead to the infamous “Door of No Return”, which is the last portal that so many slaves exited through before the long voyage to the Americas. Kristen went on to express a newfound appreciation after visiting the castles saying, “Learning this history has made me very thankful that I have never had to experience such hardship.”

The Ghanaian people use a word, sankofa, to express the importance of learning from the past. Sankofa is linked to a proverb that literally translates to: “It is not wrong to go back for that which you have forgotten.” This is fitting to sum up an Amizade volunteer’s visit to Elmina Castle and Cape Coast Castle, the sad history that lies within these structures is one that should not be forgotten. It is a history that provides a deeper knowledge of the current people and culture of Ghana, as well as a history that is a profound part of the Amizade experience.

To learn more about the opportunity to serve and learn in Ghana, click here! 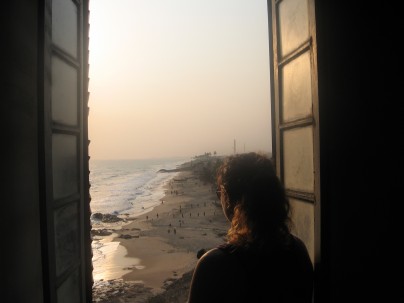