We were all ready for our break in Bukoba. The students were excited to do something new and leave their studies behind for a few days. Paul and I were happy knowing our budget would allow for some exciting adventures.
We set out on our journey from Misha walking with our backpacks ready for adventure. After waiting for the Bunda bus to arrive in Kayanga, we boarded and were off to Bukoba. (I had bought the bus tickets beforehand, which were a mere 4,000 shillings or $2.35 per person each way) Some students from a nearby boarding secondary school called KARESECO entered the bus on the way and sat close to us. We struck up a conversation, and I asked a question which had puzzled our group for weeks, “Why did Tanzanians love Qaddafi?” Coming from a country that portrays Qaddafi as a ruthless, power-hungry dictator, we were surprised to find positive opinions of the man (along with negative opinions of America’s role in the attack on Libya) here in Tanzania. The students said Qaddafi took good care of his people, and asked where else in Africa could you find a leader who provided so much for his people? They also thought the majority of Libyans loved and wanted to keep Qaddafi, while only a minority was sick of him. The perception of American imperialism coupled with our country’s insatiable need for oil contributed to the students’ poor opinion of America’s foreign policy. We’re definitely reading different newspapers, and I’m still unsure as to who is most correct. 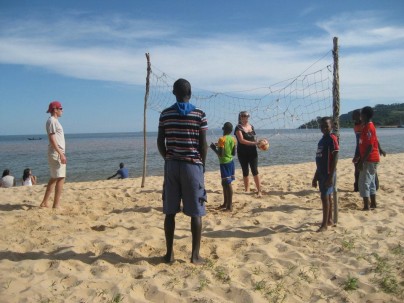 We were coming close to Bukoba, and one of the students offered to accompany us to Spice Beach Hotel. I visited the hotel when I traveled to Bukoba for Paul and my residency permits, but I was unsure as to how to get there from the taxi park. Joseph agreed to help us, and once we arrived at the taxi park, we set off on foot to our home for the weekend. After a 15 minute walk, we arrived. The staff at Spice Beach Hotel was very welcoming and accommodating. Spice is located right on the sandy beach of Lake Victoria and has quaint tiki huts on the Sbeach where people gather to eat and drink while they listen to the waves. After eating a lunch of vegetable curry (delicious), we headed to a place called Kiroyera Tours to set up our adventures for the weekend. Our contact wasn’t there, and we ended up playing volleyball with a group of people on the beach.
The next morning, Paul and I woke up early to visit our tour guide, Zaharan, and set up our tours for the weekend. Afterwards, we took our rented bikes around town and had a very good time watching the city wake up. We returned to Spice and our group was ready to set out at 10am. Zaharan arranged a motor boat for us to travel to the nearby island. On the way, we learned that people lived on the island and children attended kindergarten there, but had to come and live on the mainland once they progressed to standard 1 (elementary school). We were excited to see a Tanzanian population living an island lifestyle. We first boated around the island and saw a wide variety of birds (Paul was excited to see the African Fish Eagle), and holes which had been carved into the rock face near the water to bury local chiefs long ago. 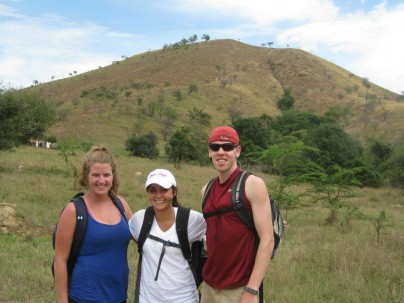