One of the many sites Amizade volunteers visit in Petersfield, Jamaica is Roaring River Park – home to beautiful scenery and swimming holes, rich in culture and history, and the site of world-renowned limestone caverns. 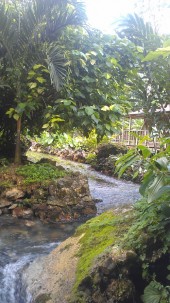 Nestled in the hillsides of Westmoreland Parish, Jamaica, is the beautiful Roaring River Park. The history of the park dates back many centuries, however today it is managed by the Tourist Product Development Company and supported by the Association of Clubs in nearby Petersfield. About 2500 international and local tourists visit the park each year to explore the area’s culture and history, visit the famous limestone caves, and enjoy the beautiful river’s waters.

Roaring River Park was once the site of Roaring River Estate, a plantation owned by Colonel Peter Beckford in the late 17th century. Beckford emigrated to Jamaica in 1662 and became very active in island politics, representing St. Catherine Parish in the Assembly, serving as the first Custos of Kingston, and acting as the Lieutenant General of Jamaica all before his death in 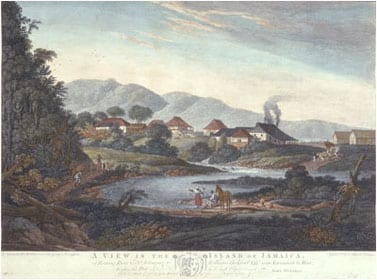 1710. Much of his success stemmed from the profits generated by the Roaring River Estate, home to one of the largest sugarcane plantations in the colony. Conditions for sugarcane production were perfect in the Georges Plain, the area surrounding the estate, as the Roaring River provided natural irrigation for the fields. Peter Beckwith’s control of this fertile area and influence in the Parish of Westmoreland eventually led to the town of Petersfield being named after him.

Within Roaring River Park, the Roaring River Cave, now an attraction for visitors from all over, played an important role in the culture of the slaves on the plantation. During the 18th century, slaves would escape to the caverns at night, seeking the healing mineral waters that flow in the cave for their bodily injuries. Having now been explored by visitors from all over the world, the cavern has gained fame due to its unique history. It houses underground springs and pools and thousands of limestone formations. While the cave itself is only about 70 feet underground, the pools are believed to be over 120 feet deep.

As the economic dependency on slavery shifted with the changes in political power over the next three hundred years, Roaring River continued to be an important aspect of Jamaica’s economy and culture. Originally harnessed to irrigate the sugarcane fields, the River now provides water for all of Central Westmoreland including the Georges Plain and the Parish capital, Savanna-la-Mar. 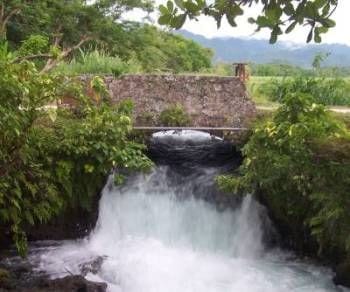 On a typical day at Roaring River Park, you can find tourists and locals enjoying the River’s famous swimming hole, a sinkhole at the mouth of the river deemed “bottomless” by locals. Tour guides will be taking groups in the Roaring River Cave and local vendors will be selling goods along the River. Truly a cultural gem, understanding the importance of Roaring River Park is an key aspect of each volunteers’ visit to Petersfield.