You couldn’t walk anywhere without getting hit by a drive-by water balloon or have a bucket dumped on you from a balcony. On the last days before lent each year the entire continent of South America erupts into the worlds largest party: Carnival. In Bolivia (as well as most of South America) Carnival is far bigger than Christmas or any other holiday. Bolivia takes Carnival so seriously that when Chile invaded Bolivia in the War of the Pacific in the late 1800s, Bolivia waited until Carnival was over to respond. In Cochabamba the entire city morphs into the battleground for the biggest water fight I’ve ever seen.

On Sunday we had a cook out with my extended host family although it didn’t take long for the family meal to turn into an all out water fight with buckets of water and hoses. Everyone participated from the little kids to the great grandparents! After a while the water fight died down into conversation and dancing but the occasional water bucket was dumped down someone’s back.

On Monday and Tuesday, however, the whole city got involved. Walking down the street, you had a better chance of getting soaked than in sea world’s splash zone. Avenida America, the main drag through the north of the city, became a battleground with people on the sidewalks waging war against the people in the cars. Families drove down the street drive by water-gunning, pickup trucks carrying water balloon militias, and even fire trucks with the fire hose artillery drove down Avenida America and fired on the infantry on the sidewalk armed with water balloons and water guns. Ladies armored in plastic ponchos sold water balloons to both sides, frantically filing them up to stay up with demand. 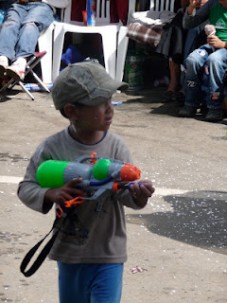 The best part of the whole ordeal was 1) everyone participated from little kids to grandparents and everyone in between and 2) everyone was very good-natured. If you nailed someone in the back of the head with a water balloon they wouldn’t get mad; they would only turn around, throw one back, and give you a thumbs up. In one sidewalk skirmish I dropped my keys in the action and one of my assailants ran over a block to return them.

The following Saturday, the entire city shut down for the parade. And Bolivia takes parades seriously; the parade lasted for 24 hours over a distance of over 4 miles. The parade groups were anything but hastily thrown together; on the contrary the “fraternidads” practice all year for the Carnival Parades. The costumes are unbelievably colorful and elaborate garnished with everything from bells to sequins to giant taco suits.