The only expectation I had for my first trip to Tuba City, AZ was that the landscape would look very different from my norm – grass and trees.  The dryness and desertness of Arizona was no surprise to me, but I found myself taken aback every time I reminded myself to really look at it.  As I write this post, the tho 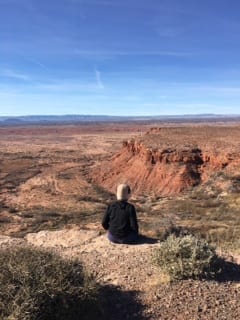 ught of the red-ness, the barren-ness, and the rocky-ness, still gives me the goosebumps that come to us when awestruck.

That was one of two expectations that I allowed myself to contemplate prior to my trip.  The rest, I told myself, would not be considered, not until I was actually living it.  My second expectation was that I knew that I would learn a lot.  I was walking blindly, in many ways, into both the Navajo and  Amizade cultures (I had only joined the Amizade team 4 days prior to traveling to Tuba City), and I expected a steep learning curve. 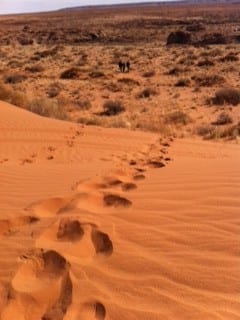 And, that’s exactly what happened.  In hindsight, I can say that I truly started with a clean slate, not just of expectations that oftimes sour a trip, but also because, I was entirely lacking any significant knowledge in either Navajo or Amizade cultures. As a result, I was able to enjoy my time there for what it was; free of having to separate out and analyze the elements of what was lived from the tangles of the presumptions of what I thought it would be.

During my time there, I experienced something that began to totally deconstruct a worldview that I have only ever known, and that’s the taboo sentiment that often accompanies female menstruation.  The week on the Navajo Nation was a time for me to consider something that I had never given much thought to prior.  The only perspective I had only ever known was that one’s period was to be kept private.  When it was actually discussed, it was done among women, and seemed to always be spoken of with a bit of disgust and dissatisfaction for the inconvenience of the physiological process.

I learned that within Navajo culture, the coming of age of a woman is to be celebrated, publicly; among women, men, girls, and boys.  It is so public in fact, that traditionally a four day ceremony is organized soon after a girl’s first menstrual cycle.  Family and friends would be notified, regardless of sex or gender, and would be invited to partake in the celebrations.  And a celebratory moment it genuinely is – it is a time for community to say congratulations and for a young woman to say thank you in return.  This to me, during my week on the Navajo reservation was mind-blowing.  Something so unexpected, something I had never even considered, came into my life, and as a result, I have one less pre-conceived notion of what the world is.

For me, it did make me ponder how much easier my coming of age would have been if I hadn’t had to feel somewhat embarrassed or ashamed about my period. But more so, it made me consider what this could mean for the young people in my life that might benefit from a communal and open outlook on what it means to come of age.