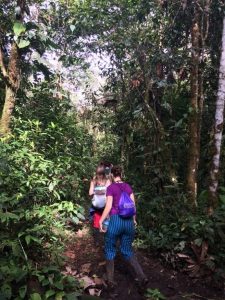 REFLECTIONS FROM AN AMIZADE-BCA STORYTELLER: EXCURSION TO THE ECUADORIAN AMAZON

What do you think of when you think of the Amazon Rainforest? The wilderness, the towering trees, the exotic animals? My one-week trip to the Ecuadorian Amazon Basin was not really about the biodiversity or wild jungle. Instead, I was able to glance into the lives and the culture of the people living there.

What? There are people living in the Amazon Rainforest!? Of course there are. Our culture has long thought of the Amazon as an untouched, exotic jungle with plenty of uncharted areas to explore. However, my trip taught me a lot about the reality of this place, and the people that have been living there for much longer than we tend to think.

We started the trip with a little bit of sightseeing by hiking out to the overlook at Cascada San Rafael, Ecuador’s largest waterfall. Next, we traveled to Lago Agrio where we spent our first night. That night we met Pablo Fajardo, who was the lead Ecuadorian lawyer in the Chevron-Texaco case about the pollution left behind by petroleum dig sites and dumping pools. We learned about the background of the case so that we would be prepared for the following day: The Toxic Tour.

The Toxic Tour is led by another Ecuadorian who has studied the contamination of Chevron’s petroleum sites in Cofan territory. Our group walked through different parts of the forest to see the impact of these sites. Our guide used an instrument to bring severely contaminated soil to the surface to show us the impact. When he poured water on the black earth, you could see the layer of oil appear. When you held the sample up to the sunlight, it began to bubble. We also walked on top of old, oil-dumping pools that were spilling into the indigenous people’s streams and rivers that they use everyday to bathe in, wash clothes, and drink from. As we passed by some of the villages, I became sad watching children play in these rivers, many of them unaware of the possible contamination. 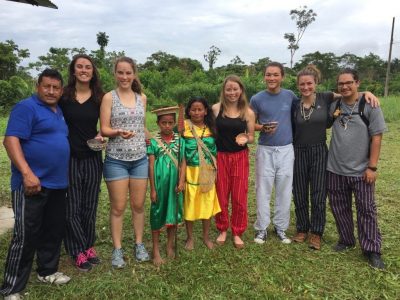 The next day, our group traveled to a Siona village to run a workshop about leadership and learn about their lifestyle. On the way to the center of the village, we were greeted by the village president’s mother, who painted on our faces with dye in traditional Siona markings. She and her grandson were wearing traditional Siona dress as well. During the workshop, we worked with the Siona people to come up with their ideas of what good leadership looked like and how it related to their community. They worked together to draw pictures of people with good leadership traits, such as listening, analyzing, friendliness, writing, working, and walking toward a better world. We also got to swim in the river with all the village children and enjoy lunch with them as well. At the river we met a villager’s pet capybara, the largest rodent in the world, and it swam with us in the river!

The next day we travelled to a different city called La Mariscal. La Mariscal is a community tourist village where the people there take in visitors to show them what it is like to live there. Many of the people work by catching and selling fish, or by growing sugarcane to make panela, a type of raw sugar, or aguardiente, a strong alcohol. We moved in with our host families that we would stay with for 4 days. At the time of our arrival, it hadn’t rained for over 2 weeks, and since people there only use rainwater for bathing and drinking, they were trying to conserve water as much as possible (which meant no showers… but hey, when you have waterfalls to swim in and small hostel bottles of shampoo, who needs showers?).

Early in the morning we went on an all-day hike to a hidden waterfall deep in the jungle. The trek descending down to the waterfall was challenging and required the use of ropes in steep sections. It was a little daunting, but the view was well worth it!

The following day we traveled to the village of Tzawata, where we had a traditional lunch called maito. It is a dish with tilapia prepared a special way, and in which the entire fish is served with the rest of the meal. While I only ate the meat, one of our guides ate everything but the skin, including the eyes. Most Ecuadorians are very conscious about not wasting food, and we definitely didn’t see any of the Tzawata people leaving edible parts of the fish behind. We also visited their medicinal garden, a recent project that was really blossoming. We saw how yucca, a main starch eaten here, is harvesting from the roots of the trees they grow into. Finally, we tasted the fruit inside of cacao plants, from which the beans/seeds eventually become the chocolate we all eat. 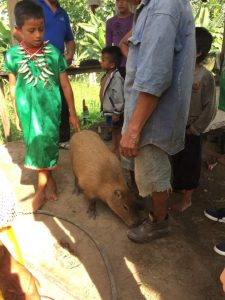 We also visited the petroglyphs on a certain rock found in the nearby river. The Tzawata people claim that these petroglyphs support the fact that the land belongs to their people. On the way back to the Mariscal, we visited one sugar cane refinery and saw the process of how they turn the raw cane into the aguardiente liquor. Since there is such an abundance of sugar cane and the rest of the soil isn’t very great for growing other crops, many of the people make their living as sugar cane workers there.

On the last day I got a chance to spend the whole morning with my host family in the Mariscal. After breakfast, we spent the time fishing at one of the nearby tilapia ponds. The ponds are set up so that the fish continually eat and breed to keep the supply abundant. I only got one fish with a regular fishing rod, but my host sister caught 6 or 7, all with a fishing rod made of only a wooden rod, fishing line, and a hook! Finally, we ended our trip to the Amazon by visiting an animal rehabilitation center where some squirrel monkeys were very excited to see us.

Though we did do some sightseeing and played with some monkeys, the majority of our trip to the Amazon centered around getting to know the lives of the indigenous people. I had an opportunity to connect with so many different people, especially with my host family in the Mariscal. I really got a sense of what it was like to live as they do and learn what family and community mean to them. Overall, the experience was eye-opening; to be immersed in a culture so different than what I am used to in the United States. Throughout all of my experiences in Ecuador, I am trying to keep an open mind and try as many new things as possible. I want to get to know my new home as much as possible!

Colby is a senior Biochemistry major and Spanish minor at Elizabethtown College in Pennsylvania. Originally from Medford, NJ, she is interested in becoming a disease research biochemist after furthering her education at a prestigious graduate school. Colby is very excited to be studying abroad with BCA in Quito, Ecuador during the fall 2017 semester.

A Personal Reflection: The Power of Code Switching