I have always been interested in languages and communication since I was a little kid, but it was not until sixth grade that I was formally taught words in Spanish. After that, all I wanted to be was bilingual. I remember looking up words and trying to formulate sentences at a beginner’s level. I was finally able to take a Spanish class in my freshman year of high school and ended up continuing the classes all four years. When I graduated high school, I knew I wanted to incorporate Spanish into my life somehow. I always knew I was going to study abroad in a Spanish-speaking country while attending college, but I never would have imagined an experience like the one Amizade-BCA has given me.

I received many doubts about coming to Barcelona because the Spanish language and culture are different than what I had learned my whole high school career, although I never held those remarks in high regard. I am currently a college level sophomore, so I came into this program only having one upper-division Spanish class from my university. Nonetheless, I was ready for the challenge. The experience of being in a foreign country for four months of my life, away from family, friends, and a language I grew up speaking, has been one of the best things to ever happen to me. 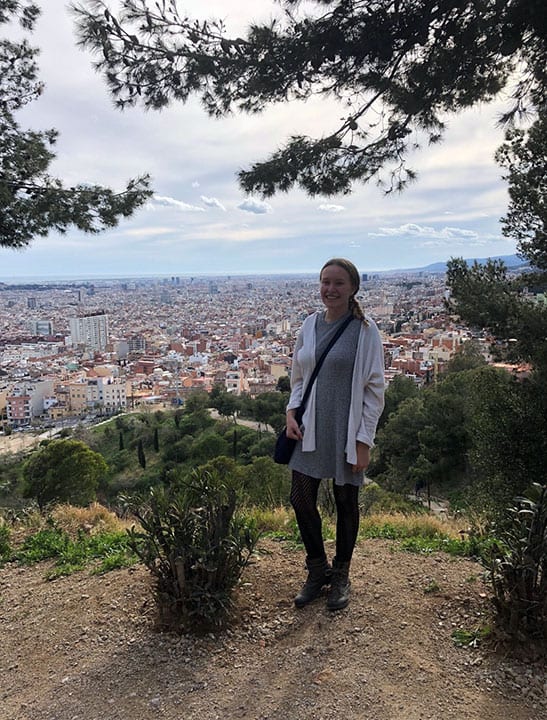 However, it has been completely different than I expected. I did not realize that I could be so immersed in a culture. I took all of my classes in Spanish at the university, co-existed with a family that spoke zero English, and volunteered at a school with third graders where they corrected my Spanish and taught me a few Catalan words. I was not totally lost in translation but I did struggle here and there. I think struggling is what helped me learn and grow the most.

My classes at the university were harder than I thought they would be because my professors knew minimal English. Even in my Spanish courses at my university in California (where all the professors only speak in Spanish to the students), they can still clear up any confusion in English, if need be. There were times when I was frustrated and upset but that only helped me want to understand more.

Before coming to Barcelona, I was most worried about the host family and that aspect of the program, because even though I love interacting and talking to people, I did not know what it would be like living with a family who has completely different social norms and traditions than I had grown up with my whole life. Surprisingly, despite all of our differences, my host parents and I really got along and I enjoyed them. I have so much knowledge about culture and life in Barcelona just by living and eating every meal with them. I have never had such a closely bonded family experience like this one and it was interesting for me to be a part of it.

I always tell everyone that I do not want to have kids, but that does not mean I do not like being around them. This semester I spent 2 hours a week volunteering at an elementary school close to the university. It was fun to watch the children interact with each other, me, and the teachers because they were a lot more friendly and outgoing than the other children I have worked within the United States. They thought it was weird that I did not understand Catalan so they did their best to try to teach me. I learned more than just a few words in Catalan, though. I learned patience, how to be okay with not understanding, and of course how I have a funny Spanish accent.

There were times when I almost backed out of this experience. When I thought I was not good enough or ready to be that far away from home, but I have now realized that you can never truly be 100% ready. There is no way to know exactly what will happen or how you will react to it. The only way to know, is to go out and do it. I think studying abroad in Barcelona has made me much more confident in myself. Confident in my language abilities, confident in my adaptability, and most of all confident that everything will work out somehow. I am always tied up in the ‘what ifs’ and ‘maybes’, but the last four months have encouraged me to think differently. From now on, I am going to be more accepting of my surroundings and the people in it and just let things be.

My name is Karma Marklund and I go to the University of La Verne. I am majoring in Psychology with a minor in Spanish which is why I chose to go to a Spanish speaking country. I am not exactly sure what I plan to do in the future, but this abroad experience has definitely broadened my horizons.