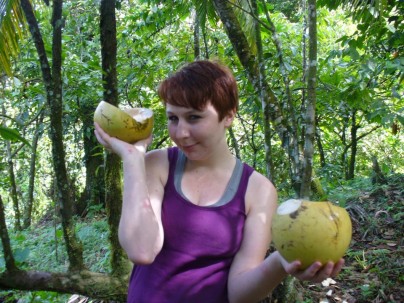 Our main instructor in the field of fruits, nuts, and other vegetation was Mr. Jose. Mr. Jose is a Matelot native who lives on the back road of the community. Matelot is basically situated on two hills – the main road runs up and down these hills and the two additional roads circle around the outside, one on the coast and the other up on a ridge in the back. Mr. Jose lived on the ridge.

Mr. Jose is an older man, and exactly what you may expect of a Trinidadian living in the remote jungle. When we met him, he wore a government issued military-green jumpsuit with wading boots and a sheath on his belt for a machete. His estate however was situated about two miles into the jungle. He owns 10 acres on which he has built a small structure with benches, a cooking area, and a sleeping area with a roof over the whole thing. He and his sons utilize the estate at least once every other day, and hope it can become a tourist destination in the future. It is no mystery why this area attracted us and will certainly attract more in the future.

The plot surrounding the structure is dense with king orange trees, portugals (a sort of different kind of orange), cocoa trees, coffee trees, nutmeg trees, coconut trees, and many more. In our short afternoon visit, Mr. Jose showed us each of the trees as well as other vegetation and described how it grows, what Trinidadian’s do with certain food items, and fielded the many, many questions we had. In the same afternoon, I drank from a coconut, sucked on cocoa beans, ate coconut jelly, ate an orange that had been peeled by a machete, and tasted the freshest coffee that anyone in the world can taste.

Each of us left the estate that day in awe – partially at the beautiful foliage and delicious fruits, partially at Mr. Jose and his hospitality, and most definitely at the resourcefulness of the wonderful residents of Matelot.

The Hike of a Lifetime

Each of us has hiked before so with no hesitation, we eagerly agreed to a hike to the local waterfall. We knew that the rainy season had made the way quite muddy, but we had our tennis shoes and jeans on, ready to rock.

We had two men as our guides – Quacy and Peter. Both wonderful residents of the area and fathers of youngsters who we spent some time with throughout the week. Kareem and Collin came along as well – two teens from the town whom we became friends with. They say the hike was about two miles, however the trek took us close to two hours, each way. The trail itself is overgrown and narrow at parts, but lends itself to the most beautiful up-close-and-personal view of the jungle you could ask for. At one point Kareem climbed a twiggy Cocoa Orange tree. From about 25 feet above the ground, he shook the branches so that we could pick up the delicious fruit for a snack. Many small creeks and drainage areas from the mountain crossed our path along the way, creating some muddy situation and several slips and falls. With the help of Peter and Quacy, we mastered everything from climbing muddy embankments to the proper technique for sliding down a steep hillside on your bottom. 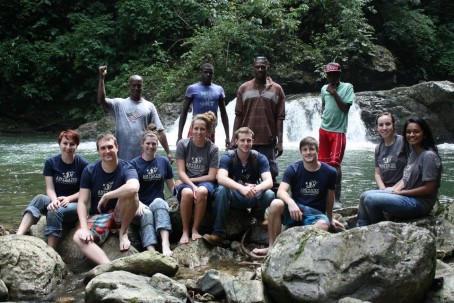 We had an incredible amount of fun. Dirty, sweaty, and quite tired, we were ready for a swim when we got to the waterfall. A pool about 15 feet deep surrounded the base of the 12 foot falls, giving us a nice cool place to bathe after the hike. The rock on the sides of the falls is shaped in such a way that it resembles steps, allowing those of us who wishing to jump into the water an easy way to access it. Once on top the falls, another world of pools and falls opened up. Rosie, Josh, Michael, Kareem and I pressed on further up the river with the guidance of Peter. We stopped only when a new set of falls that we faced were impossible to climb – not that it stopped each of the boys from trying to swim against the unforgiving current.

While the waterfall and the hike were special, wonderful, and the purest form of a natural beauty, this isn’t what made this hike so special. It was the bonding between group members that can only form when you hold hands and slide down a hillside together. It was the encouragement each of us offered to the members of our group who would have otherwise shied away from swimming in the pool or jumping from the waterfall. And most importantly, it was the kindness of Peter and Quacy, who took their weekday afternoon to not only show us the path, but teach us, help us, and encourage us to take advantage of every opportunity in the way that we did. During this afternoon, we added two more to the list of those in Matelot whose kindness and generosity are overwhelming.

Keep checking back for more updates from Grace or visit her blog directly at www.graces-adventure.blogspot.com. 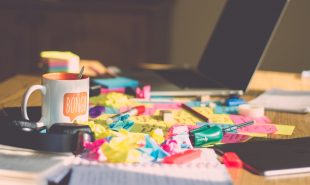 This post is written by Amizade’s Executive Director, Brandon Blache-Cohen,… 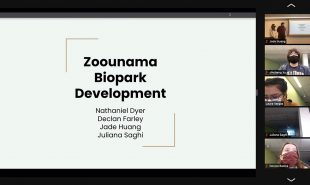 The second half of 2021 brought us wonderful experiences with… 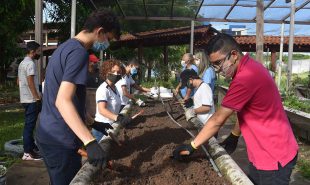