The DORCAS Women’s Group and Things 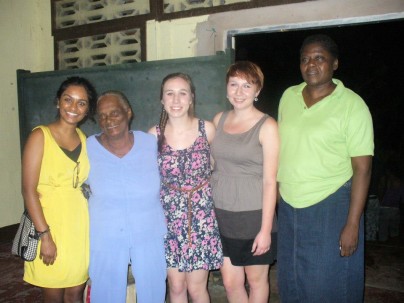 The DORCAS Women’s Group was established about four years ago by Beulah, Michelle, and another woman in the village. “How much housekeeping can one do?” Miss Beulah said to me in explaining the idea for the group. The three passionate women wanted something for the female population of Matelot to do outside of their day to day duties and together they formed the DORCAS Group – with the simple motto ‘Teach. Travel. Turn’ referring to teaching the bible to each other, traveling and seeing areas outside of Matelot together, and for turning a new leaf in their lives.

The group owns the plot of land that is the DORCAS Park. Its ocean front view consists of a grove of almond trees and cedar trees. The gorgeous area has a camp house for the women and other groups, a few fire pits with benches and make shift tree stump seats, and some old swingsets. There is a small waterfall on one side opening up to a small pool for bathing. Unfortunately, the water from the waterfall is often known to flood the majority of the park as it did during our visit, rendering a lot of the land unusable.

The DORCAS Group has big dreams, for the park and otherwise. In my discussions with the different members, they each see Matelot as a site for ecotourism in the future, however the money just isn’t there. Without the buy in from the government to resurface the roads, creating easier access, little money is useful in attracting tourists to the area.

In the spirit of doing what can be done when it can be done, the women are currently interested in making the park more attractive and useful – and this is where we come in. Jon is majoring in Landscape Architecture at WVU and took on the project with zeal and with knowledge that none of us could bring. In just two days, he created a long term plan for the restructuring of the park in order to enhance its beauty and utilize its full potential. Apart from aiding him, the rest of us proceeded with doable tasks such as preparing rocks for a drainage system and clearing the pathways and entrance points. The women were pleased! The groundwork is beginning to be set for programs in the future.

The Nature of Trinidad

It is the rainy season in Trinidad — a time that runs from about February to September or October. This means it rains nearly every day, typically a late morning or afternoon shower that appears from the sunshine nearly as fast as it disappears a few minutes later. It has kept the temperature cool and brings down the humidity every once in a while. The rainy season also mean the ocean is very rough. Unfortunately this did not allow us from boating to Madamos Beach during the week, but in its stead we’ll be walking to the waterfall up the river.

Interestingly enough, I’ve seen much less wildlife than I was expecting. There are quite a few insects (the mosquitos love our legs) but very little in the form of wild animals. After a few days of pondering how a “deer” (by our standards) could be traveling through the mountainous jungle, we found out that a deer to them is what we would call a goat. It is quite often that we see birds flying about and dogs roaming the street, but we have yet to see anything in the jungle, especially the coveted sight of a monkey. One dog in particular likes to relax on the guest house door step – he goes by Henry, among other names.

One of the most wonderful experiences throughout the week is seeing and learning about the sheer number of fruit, nut, and spice trees that naturally grow in and around the town. I had at least three different kinds of oranges (Cocoa Orange, King Orange, Portugal, etc…), a Mammy Apple, a Pomerac, Mangoes galore, and countless others.