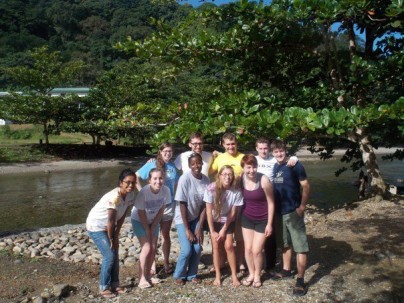 Through Amizade Global Service-Learning, I will be travelling to Matelot, Trinidad with eight other students during the week of January 5-12 to continue to forge friendships with the people of the community. I am a Slippery Rock University senior and am joined by four other Slippery Rock students, Gen, Tesin, Tyler, and Amanda. In addition, we have one student from Allegheny College, Rosie, and three from West Virginia University, Jon, Josh, and Michael. We hope you enjoy our adventure as much as we are!

The First Days in Matelot

From the moment we met Robert in the Port of Spain airport on Saturday evening near midnight, it was obvious to me there was lot of learning to be done, and a lot of fun to be had. Robert was our cab driver, he owns a house near the bed and breakfast we’d spend a short night in in the outskirts of Port of Spain. He entertained us with stories of the food and culture of Trinidad as we waited for some of the other student participants to come in on a later flight. He told us bananas are often called “figs”, that gas is around $0.90 a liter, and how all his daughter wanted for Christmas was an iPad (“She’s four but acts twenty-four”, he said while chucking).
|
After our lovely evening in the Samise Villa with Denise as our hospitable hostess, we prepared for the three hour drive around the coast of Trinidad to the rural town of Matelot with our newest friend, Beulah (Amizade’s Site Director).  Beulah met us at the Villa, enthusiastic and smiling as we would soon learn she always is – and throughout our drive pointed out different notable sites, towns, and people – from where you could get good roasted corn to the various beaches and breathtaking views we passed. “The road is going to get bumpy here everyone,” Beulah warned us all. “You mean bumpier?” Said by Michael, thought by all – we all laugh together acknowledging the statement’s truth as well as the slight discomfort in our behinds.
|
You know when you have an image of a place in your mind before you get there, and it is nearly never what you pictured? I was imagining the most gorgeous, ocean front, tropical, colorful images of our brief home while in Matelot. Somehow, the stunningly beautiful area exceeded each of the expectations I had – and so did the people. The Dorca’s Women’s Group met us with open arms – Beulah, Julie, Grace, Sandra, Michelle, Bernadine, and many more – greeted us with food, fellowship, and a whole lot of laughs.
|
Our first few hours were full of wonderment – exploring the guest house and river front property that we call home. The house itself is located where the river meets the sea – creating a wonderful view of the crashing waves as well as plenty of places to cool off and bath in the water. We’re at the end of the road – literally the last stop as you follow the windy, mountainous streets through Matelot before you need to cross a footbridge to get any further. Across the bridge is the Dorca’s Park – a plot of land squished between the jungle and the water – full of life and often used by visitors and residents alike as a spot to getaway. Rising up on a hill behind the Park is the Matelot High School. Each morning and afternoon, we wave to the uniformed teens as they pass by on their way to school.
|
We spent our first evening in Matelot as the residents often do – spending time together over food and drink with a little bit of music to set the mood. After introductions and niceties from all present, we were soon dancing to the music, from reggae to salsa and everywhere in between. Jon won the first Musical Chairs game, but he wasn’t so lucky the second time.
|
Tesin, Rosie and I spend our night’s at Miss Mona’s, an elderly woman who lives perched atop a hillside with crashing waves on two sides. She has met us with continued generosity and kindness, just like the rest of the Dorca’s Group.
|

Keep checking back for more updates from Grace or visit her blog directly at www.graces-adventure.blogspot.com.