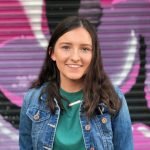 This post was written by Amizade’s Global Projects Intern, Tierna McConnell. She shares her reflections on her time living and working in Pittsburgh with Amizade, as well as how COVID-19 affected her experience.

When I first found out about Amizade through their Irish Site Director Stephen Hughes, I was immediately obsessed. What was this? A chance for me to live out my life’s dream of moving to America? It didn’t seem real. Not only did Amizade make this dream reality, but they also gave me the opportunity to do something that really made a difference in the lives of the people we worked with. Amizade was offering something which I never really thought about before: I’d be able to live in the States while also interning with an organisation that helped people have the experience that I longed for myself. Not only that, they gave me the experience of independence I was craving. Being 21, studying at home in Belfast while still living with my parents, I never really got that university life of moving into dorms and meeting a lot of new people. Moving to Pittsburgh was my chance to finally face the world on my own and maybe hit up a few college parties along the way in the country that basically defined the so-called ‘College Experience.’

I would say as a person I am quite particular, and with that comes not always wanting to do the same thing as everyone else. This is what made Amizade perfect for me. I’d somehow found myself in the middle of this amazing, quirky, multicultural non-profit that never has a dull moment. Being someone who has a bad case of wanderlust, I understand the need and want to see somewhere new. To think that there are young people that don’t even have a passport, it made me want to work with Amizade even more. By working with communities that don’t have the opportunities that others may have, Amizade and their partners are able to provide young people with the experiences they need, to help them understand that there’s more to life than what’s on their front door step.

I’m not sure if it’s because I’m a history student, or the fact that I live in Belfast, a place where all that’s seemed to be talked about is its history (maybe even too much) but anytime I go somewhere I love to learn about its past. I guess being from the North of Ireland where history seems to still dictate the future, I just expect people to have the facts about their country’s past and know everything about it. By moving to the States I began to understand that this is not the case everywhere. A big part of Irish culture is talking about the past, even if it was a difficult time, but elsewhere people seem to be focused a lot more on the present and what the future looks like. Maybe this is something we also have to learn. Anyway, my point to this is that I think it’s important to know the history of the place you’re visiting.

Today’s society can be so focused on getting the best photo for their Instagram rather than explaining why the place they’re visiting is or was important. I had the opportunity to travel to two of Amizade’s sites; Washington, D.C. and Puerto Rico. At first, two completely different places, far from similar. That was until I visited both. Gentrification, a topic which before traveling to D.C. I’d never considered before, can be seen in a lot of areas in both of these places. The displacement of people from their communities because they can no longer afford to live there was explained to us by locals of both places. I’m still grateful for Amizade opening my eyes to this issue, and it was during these experiences that I really understood Amizade’s mission.

So here I was, living my best life in Pittsburgh, travelling to new places, meeting new people and learning new things. Nothing could go wrong, right? WRONG. COVID-19 (or Coronavirus) just had to creep its way in. You could see it happening, one day it was the lunchtime topic, next it was daily meetings to keep us updated, then finally it was working from home. Honestly, I don’t think the whole thing felt that serious for me, which when looking back was probably because I was trying to ignore the real possibility of me having to return home to Ireland. My mother came out to visit the weekend before St. Patrick’s Day—unfortunately the parade was cancelled but we still tried to make the best of a bad situation. Then in some twisted turn of events I found myself sitting on a plane, alone, heading to Dublin. Probably one of the biggest disappointments in my life, but I mean coming home because of a global pandemic is a pretty good reason.

To make things even worse, because I would have to leave the US for over a certain amount of time, my J1 Visa would be terminated. This meant that I would be unable to return to Pittsburgh if there happened to be some miracle and this whole thing calmed down. I wasn’t the only person that this happened to—a lot of young people on temporary visas around the US were sent home from their study abroad, au pairing, internships, you name it. Students everywhere around the world were pulled from their year abroad early, a year that they’ll probably not get to repeat. For a lot of students this was their last chance to do major travelling before their final year of university/college. What I found difficult was that there was basically no advice given to young people on independent J1 Visas and to give up a life that you’d just gotten used to wasn’t so easy when no one was outright telling you what to do. Amizade even had to eventually make the decision to bring home a lot of their students: it was the right thing to do ethically.

I’m not going to be negative, though: I got to spend 7 months living an experience I couldn’t have made up if I tried. I got to know some of the most amazing people who only want to do good, travel to places I probably would never have been and experienced some of that cheesy American college life I’d wanted, and I have Amizade to thank for that.

Also, I got bumped up to business class on the flight home, so that softened the blow a little.