This summer, a group of students from Indiana University of Pennsylvania, along with their professor, are visiting our site in Jamaica. While in Petersfield the group will volunteer with Amizade’s community partner, the AOC at their annual summer camp, stay with local Jamaican host families, visit various Jamaica sites, and hold class sessions. Follow along with their program on our blog! 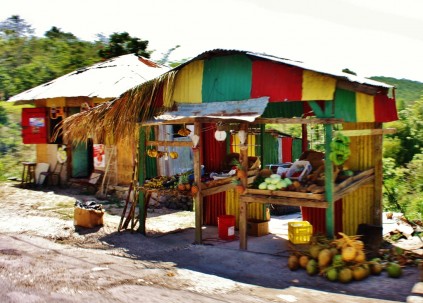 Today is day three in Jamaica. I’m in love. We arrived at the airport in Montego Bay and were greeted by Mr. Brown and his entourage. Going through customs and retrieving our luggage went smoothly. It wasn’t until we stepped outside of the airport that it truly felt like we were in Jamaica. I’d call it ‘organized chaos.’ “Taxis” (aka beat up cars) were zipping through to pick people up, blasting their reggae music. People park wherever they want, it seemed as if there were no rules. While we were waiting for Emily and Annie to meet us, we drove to our first Jamaican fast food place called ‘Tastees’. To drive in a Jamaican taxibus is a little bit scary to say the least. To start they drive on the left side of the road (very fast) which takes some getting used to and there are no stoplights or organized road services. People take Penndot for granted! During the ride we saw familiar signs for KFC, Pizza Hut, Wendy’s, and Payless. It was really frustrating because one of the main reasons I came to Jamaica was to see life in a different, unfamiliar light. I wonder how far away you have to go to escape Western influences? There are three different types of horns that are used to communicate on the road: 1) 1 beep-hello! 2) two beeps- get out of the way 3) piss off. The trip from the airport to the Associate of Clubs (AOC), where camp is held, took about an hour and a half. The scenery was gorgeous with a wide view of large mountains and lush forests. There are as many churches as there are bars. Little shacks, handmade, painted in bright pastel colors. Did I mention how hot it is here? I’m starting to get used to it.

We were welcomed with hugs and food-I can’t think of anything better. Some of the food that we ate- fried chicken, bbq chicken, pork, fish, grilled vegetables, colsaw (without dressing), rice and beans, cucumbers, sweet bread (so.good.), and juice. We sat at one long table, introducing ourselves, socializing, and taking it all in. Mr. Brown gave a speech about the history of the AOC, which began in 1986. The AOC has come a very long way, it has made Petersfield nationally recognized. One achievement that sets this community apart from the other13 perishes is the recreational park the community has been building over the process of 12 years. There are beautiful flowers, a slide, see-saw, gazebo, tables, and a food stand.

Later in the evening Mr. Brown assigned us our roommates and house mothers, 3-4 students per household. We all parted and went to the homes. Everyone commented on how nice the homes were, a lot better than we expected- nicely decorated, cozy, plumbing, television, radios, kitchen appliances. There’s no air conditioning but plenty of fans to cool you off. There’s also a lot of bugs, but you kind of get used to that too. Some of the people stayed up getting to know their new families and others went right to bed after the long day. I’m living with Bree and Annie and my house “sister,” Kadeen, is amazing. We hung out in the living room, watched tv, met her sister Kesha, and her kitty whose name is “kitty-koo.” We got to try a fruit called sweet-sop. It was light green, and basically fell apart, exposing the edible part. You had the suck the flesh of the fruit off of black seeds and spit them into your hand. It was delicious and tasted like a mixture between a kiwi and a banana. Three single beds in a row and then we all passed out. We woke up the next morning around 8:00 and had breakfast. Kadeen made us eggs, plantanes, mango, and pineapple. All of the food here taste so fresh and unprocessed. I really like it.

The bus picked us up at 9:00 to go to the AOC and experience our first day at camp! We all split up into different groups. I went with the “kiddies” (6 year olds) and others went with the 8 years old, juniors ( 10-12 years), and seniors (13-17). The activity that we helped with was having the children trace their hands on a piece a paper and write something down they can use their hands with to make Jamaica a better place. There were a wide variety of answers- work, clean, be a friend, giving. There was a really funny one- pet kitties and eat mango. I love little kids.

After an hour of camp we hopped on the bus and made our way to a public beach called Bluefields. It was paradise. The sand was white and the water was so blue that when you looked out over the sea it blended right into the sky. One of the prettiest views I have ever seen. There were only a few other people on the beach and they joined in our activities. Everyone around here is so friendly and kind. The day included playing volleyball in the water, a dodge ball like game on the beach, soccer, and just relaxing. For lunch a wonderful man made us jerk chicken and pork. I keep saying that the food taste good but the jerk chicken was phenomenal. We also tried bread fruit, which is considered a fruit. It didn’t taste like bread, and it didn’t taste like fruit. It sort of tasted like mashed potatoes with a different texture, I’m not sure if I really like it.

It poured down rain while we were swimming in the water. It felt really nice because the rain was cooler than the ocean. We had class on the beach and talked about some of the readings we had and in general our expectations and assumptions about Jamaica. We left the beach around 5:30 to go home, eat dinner and shower, then around 9:00 pm we came back to the AOC to listen to a guest speaker, Jean Brown. She talked about the history and development of Jamaica. A quick overview: Jamaica was first inhabited by the Arawak and Carib natives, then Spain took over, and then England seized Jamaica. When Spain was in control they enslaved the indigenous people and basically killed of the entire culture/community. Some were able to escape but none remain in Jamaica today. When Jamaica was controlled by the British they brought people from India and China to work in the fields. During the North Atlantic slave trade Africans were then brought over and enslaved. Jamaica earned is independence on August 6th, 1862. We also learned about the language. The formal language in Jamaica is British-English however the day to day speech is carried out on Carib creole/Jamaican dialect. It is mainly a blend of English, African, and Spanish. Food, dance, and music follow the same pattern. The spices came from Spain, jerk came from Africa, and curry came from India through the British.

At the end of the speech, our house sister Kadeen and her boyfriend Dwayne picked up Annie, Bree, and I to take us to a dead yard. When someone passes in Jamaica there are nine days of celebration, and on the ninth night dead yard is held the night before the funeral. Sort of like the last goodbye. The entire ride there we were just laughing and in awe because it was the first time in our lives we were going into a situation completely blind. It was exhilarating. When we pulled up it literally looked like a county fair- cars lining the street, small vendors selling anything you can imagine, hundreds of people walking the streets. We walked to the house of the woman who had passed away. She was a significant part of the community based on the amount of people who came to support. There was huge yellow and white tent, the kind you see at a circus, with a live reggae-gospel band playing. The music was so passionate and the people responded to it with their entire bodies. It was a rush of emotions I had never felt before. We were literally the only 3 white girls there and the singer noticed us. He came over to me, grabbed my hand and I jumped right in and started dancing. It was so exciting! I had never seen so many people excited and happy during the mourning period. I was talking to Dr. Swauger about it and she pointed out to us that emotions are a learned part of society. We feel and act the way we do based on what we are taught-for example, during funerals in the states people tend to cry and wear black because that is the social norm. The first time in our lives we felt like the minority however everyone was friendly and accepting. Another custom they have is to bury the family member on their land. We walked up the hill to the grave site which was made of cinder block and the inside was decorate with paint, crosses, and words. It was beautiful. Shortly after we returned home and went to sleep.

For more on IUP’s service-learning experience in Jamaica, visit their blog or check back here!