This 4-part blog was produced by WVU service-learning students over winter break. The students spent 2 weeks visiting the overgrown village of Jukwa, Ghana. While there, they met with local leaders, helped work on the construction of the local library, visited local historical and cultural sites, and designed an innovative income-generating “projector project.” This is their story.

It’s New Year’s Eve and it’s crazy to think we made it to Ghana just five days ago.  In some ways, my first trip to Africa has been just what I expected and at the same time I know it’s far different from what I could have imagined.  All of the sites and images displayed by the American media of Africa are certainly here, but there is also the presence of huge shopping malls and resorts in the middle of nowhere.  There is certainly wealth, technology, and educated people well beyond the amount that most Americans would comprehend to exist in a place with the stigma of a “third world” nation.  Our group of studens is small and no two of us are too much alike, but this just gives us that much more to learn from each other as well as from the people of Ghana. 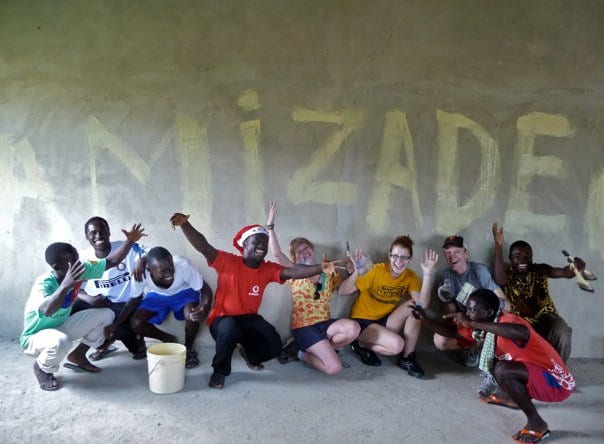 Arriving in the busy, hectic, traffic-filled capital of Accra, I quickly was forced to learn much of the culture and customs of this nation.  I admit it could be frustrating at times to feel foolish or out of place, but it was also quickly obvious that the people of Ghana are generally very welcoming and friendly.  This became more obvious as we made our way from the city into the rural villages as well.  Now we are settled into the village of Jukwa, not far from the major city of Cape Coast, where we will remain for the rest of the trip.  I think we all were in some form of amazement when we rolled into Jukwa and found our living arrangement to be a resort by Ghanaian standards.  Complete with a pool, air conditioning, and a billiards table, it was truly amazing to see such a western-styled hotel in rural Ghana.  After finding an Apple store in Accra (which we don’t even have in West Virginia) and then arriving at our hotel, it was quite obvious that the world is quickly growing, developing, and advancing at rates beyond our expectation.  We are witnessing globalization in Ghana, which really shouldn’t surprise us too much.

Jukwa, I imagine, is like most Ghanaian villages where living quarters are small, lack luxuries such as air conditioning apart from the wealthy, and filled with genuine people.  It amazes me that parents let their children play with foreign strangers when this concept would be thought of as a crime of attempted kidnap in the US.  The city is littered with trash that youth must spend time removing from the soccer pitch each time before they play a match.  No effective sanitation system is in place and trash cans are a rare sight.  The city smells of the trash, cooking smoke, and reeks of dried fish in many places.  It feels so wrong to be staying in a hotel that provides all of our comforts from home, when the rest of the city sleeps each night on dusty floors and with no intentions of taking a shower the next morning.  The people have accepted us into their community, but I feel like we can’t really ever relate to them on a deeper level without being in their shoes and feeling how they live.  At the same time, I admit to my own selfishness in that I would not willingly give up the comforts we have at the hotel, but without doing so it’s hard to say that we are truly becoming global citizens.  Overall, I feel very privileged to be welcomed to Ghana and am excited for whenever I may get to play my first soccer match with the locals.