With slightly fewer than two weeks left in Barcelona, I feel as if I have much to reflect on. What is clear is that this semester has been one of the more challenging ones that I have experienced, unexpectedly. I have new, exciting plans of work and research that I hope to pursue next year and after college. I reinforced certain ideas of how I want to live my life, but drastically changed others. I learned how to be alone and not feel lonely; how to understand someone without comprehending everything that they say.

LEARNING INSIDE AND OUTSIDE OF THE CLASSROOM 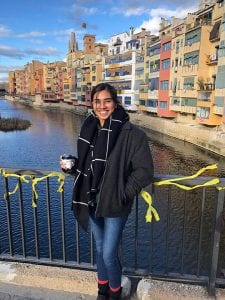 Although I am earning a double major in two highly quantitative fields, I chose to study qualitative subjects while in Spain. I took Spanish history, literature, and grammar classes, all of which were taught fully in Spanish. I learned the value of following and predicting movements throughout history, such as democracy, by focusing on two of the most turbulent centuries in Spain. I examined the Spanish language through a linguistic lens and caught a glimpse of the nuances of translation through Morfosintaxis, an advanced grammar course. I discovered fascinating loopholes in Franco’s literary censor mechanism by reading books published during the fascist regime. I realized that reading a book in a different language is an entirely different endeavor than doing so in one’s first language–– but that it can also be more rewarding.

I also directly enrolled in a Universitat de Barcelona art history class that focused on the Avant-Garde movements of the early 20th century in Europe. The only other art history class I had ever taken was that of the pre-semester course, which was an overview of history and art up to the 20th century. Not only did I learn the Spanish words for different architectural facets of churches, I came to understand how art reflected the mentality and cultural values held in those times. During my art history classes at Universitat de Barcelona, I was drawn in by the historical interpretations of art that was produced before and after the two world wars.

I have been lucky enough to visit some of the world’s most lauded museums and experience art and history directly. I lost track of time in elliptical rooms filled with Monet’s Water Lilies and taken aback by the brash violence of Picasso’s Guernica. I craned my head in awe of the splendor of La Sagrada Familia and closed my eyes in remembrance at a mass grave for persecuted Jews in Budapest. I learned that traveling is not just for seeing beautiful places, but also for remembering horrors of the past. 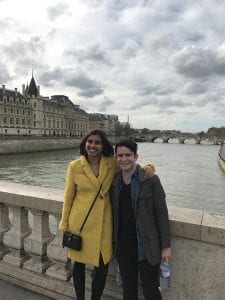 As a student at Universitat de Barcelona, I was surrounded by local students from the city and other nearby towns. Being a college student in Barcelona does not usually involve moving away from home, which also means it is drastically different from being a college student in America. College is just another part of one’s life, not one’s entire life. Even students fully embody the so-called “Mediterranean Equilibrium,” in which work neither infringes upon time for food nor time for friends and family.

I spent my Wednesday mornings in Barcelona volunteering as an English Teaching Assistant at a High School. I used to work as a camp counselor for elementary school students, but I had never worked with High School aged students before, and it was undeniably more challenging. I worked with students at many different levels of English competency, and was awed by the vast range of skill-level. As American media is so pervasive, many of my students were inspired to learn English because of music, film, or TV shows that they hoped to understand in their original versions.

The students at the High School were driven and college-bound, but not many would have the opportunity to go to an English-speaking country. I tried to show students that learning English, or languages in general, is critical to being a global citizen even if they may not be able to travel much. It was exciting to be seen as a role model and use that influence to encourage students to pursue language studies more. It meant a lot to me that I was able to inspire more students to improve their English, in the hopes that their proficiency will lead to many opportunities in the future.

Undoubtedly my favorite part of studying abroad was the relationship I built with my host mom who speaks little to no English. I found that we had fewer communication troubles than I had expected, and that I only had to resort to charades a handful of times. One of my favorite things about her is that she can lightly correct my minor errors without interrupting or ending our conversations. I found that being corrected is something I value greatly and I am a much better Spanish speaker because of it.

With her, I learned how to navigate situations in Spanish that I would have never had to do had I not lived with a host mom. I learned how to ask for support when I felt homesick and how to celebrate successes. I also was lucky enough to get a direct perspective on Spanish and Barcelona’s culture, whether it was through food, music, or politics. Most importantly, I made a lifelong friendship with someone who, on the surface, I don’t share a lot with, but who I admire and understand on a more profound level. She is one of the most content people that I know and I hope to carry her philosophy with me throughout my life, as I am sure it will only make me better. 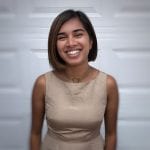 Supriya is a rising senior at Tufts University pursuing her double major in Computer Science and Cognitive Brain Sciences. She loves Jhumpa Lahiri novels, singing, and cares deeply about women’s rights. She will be interning as a software engineer at Amazon Robotics this summer and is excited to see what senior year will bring!