In 1994 Daniel Weiss founded Amizade Global Service-Learning as a vehicle of exchange between volunteers in the United States and a Brazilian non-profit organization called Fundação Esperança (or Hopes Foundation) located in Santarém Brazil. At that time, Fundação Espearnça was largely a health organization operating outpatient dental and medical services and championing public health ventures in the lower Amazon River Basin. Then, in 2001, Fundação Esperança launched a private university, Instituto Esperança de Ensino Superior, IESPIES (or Hope Institute for Higher Learning). Amizade’s relationship to Fundação Esperança evolved accordingly, and the two organizations expanded their partnership to include opportunities in both education and health. Over the last ten years, as IESPES has soared in student body size and major disciplines offered, Amizade has sent individual volunteers and service learning groups to Santarem to aid in construction projects, study anthropology, participate in public health internships, fill medical placements, and more. Seventeen years later, the flagship partnership remains very strong. Amizade and Fundação Esperança are poised for their newest paradigm shift: an exchange in the reverse direction. On August 31, 2011, Amizade will welcome for the first time a delegation of 6 individuals from Santarém.

From Amizade’s point of view, the delegation represents a powerful advance in the hope for bilateral exchange. West Virginia University is a central player in the realization of this vision. In May of 2010, Amizade’s site director in Brazil, Nathan Darity, hosted Dr. Michael Lastinger, Associate Provost for International Academic Affairs and George Lies, Grants Administrator for the Office of International Programs both of West Virginia University, for a three-day visit composed of meeting with local universities. The visit opened doors to negotiations about university-level exchange of students and professors. Now, 15 months later, members of the academic community in Santarém are traveling to the US in the hopes of clarifying a mechanism for exchange as well as exploring opportunities for international research and collaboration. The Santarém delegations includes IESPES director Irene Escher, four IESPES professors, and a professor from the Universidade Federal do Oeste do Pará, UFOPA (or the Federal University of Western Pará).

The delegation will spend its first five days in Pittsburgh, where Amizade will host an opening day reception on the morning of September 1st in its Pittsburgh downtown office. Then on Friday, September 2nd, Amizade is inviting friends and colleagues from the Pittsburgh community to meet the delegation for an informal happy hour at the Church Brew Works located at 3525 Liberty Avenue in Lawernceville beginning at 6pm. This is an open invitation for anyone to come out and welcome these Pittsburgh first-timers, and to network and socialize. 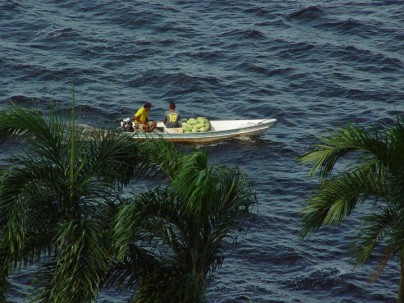 The delegation will travel to Morgantown, West Virginia on Monday September 5th, to begin a week of meetings with professors and administrators at WVU. Finally, on September 10th and 11th the group will spend a closeout weekend in Washington DC, before returning to Brazil. Amizade is incredibly honored to be involved in the two week visit, evidence of the encouraging opportunities made possible through international community partnership.