Washington D.C., as we all know, is the capital city of the United States of America, a country that stands for freedom and possibilities, where anything imaginable is doable, a city that, for many, represents the American Dream. Walking along the streets of this bustling city, one will find themselves amongst hundreds of tourists and locals enjoying their day. Coffee shops and restaurants, incredible museums bringing to light world history, American and European art, as well as memorials established in memory of our past. Luxury, culture, and history define this place, where a nation was established and the President resides.

However, most people tend to forget, or perhaps even ignore, what goes on beyond this spectacle representing freedom and possibilities. Walking down a few streets from the main part of Washington D.C., Amizade volunteers experience the harsh shock of reality. What one sees there is no comparison to the image perceived of Washington D.C. Hundreds of homeless people live in poverty on the streets, spending each day trying to survive to the next. Amizade volunteers describe their confused, disheartened, and enraged reactions, seeing these people live out of shopping carts when only several blocks up the road people roll by in a luxurious Lexus, BMW, or Mercedes. 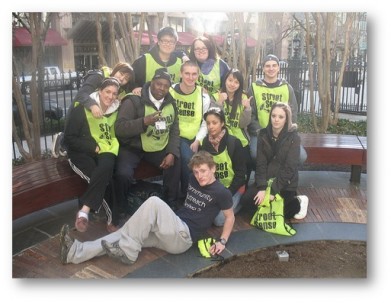 Amizade volunteers’ first experience in helping the homeless can often be described as intimidating and sometimes even frightening. Yet they quickly realize that those whom they came to serve are humans just like themselves and begin seeing their hearts instead of their appearances. An Amizade volunteer describes her experience with a former homeless man, Steve, whose story involved many drugs and being thrown out onto the streets. This man’s image may not have been very inviting, being 6 feet tall and weighing over 200 pounds; however, this volunteer soon found this man’s gentle nature to resemble a teddy bear. As their time in D.C. continues, Amizade volunteers find themselves overcoming stereotypes and forming bonds with the homeless. They offer service through providing meals in soup kitchens, participating in fundraising events such as Empty Bowls in order to raise money while providing food simultaneously, and by selling newspapers written by the homeless in which proceeds get returned to them.

Amizade volunteers have the opportunity to bond with the community by establishing life-long relationships and interests, which in turn, opens their eyes to the reality and severity of poverty. Our volunteers take part in a mélange of cultural visits, which include a visit to the Holocaust Museum that brings to remembrance another population who was marginalized and forgotten about, to say the very least. Through the awareness of history and the simultaneous city life, Amizade volunteers get a good grip on reality and learn to love and realize the importance of volunteering and helping people in need. It is not always necessary to go abroad in order to serve communities in need, when they can be found just around the corner, if anything, in our own capital, where the American Dream stands as the symbol of the nation.